The last of SwimSwam’s Top 20 high school class of 2023 boys’ recruits has made his decision: Rex Maurer is headed to Stanford.

There’s been a lot of speculation about whether Maurer, a 2022 Junior Pan Pacs silver medalist and the #2 recruit in his class, would stay in southern California or head up to the Bay area. His mother, Lea Maurer, is the head coach of USC. This is her first full season in the role–she’d been serving as interim coach since fall 2021.

However, the Maurer family also has a deep connection to Stanford. Both Lea and Erik Maurer earned individual NCAA titles and were part of multiple championship winning teams when they swam there in the 1990s. Lea was the head coach of the women’s program from 2005 until 2012 and is a member of Stanford’s Athletic Hall of Fame. Currently, Rex’s brother, Luke Maurer, is a junior on the team.

That time would’ve also earned him an NCAA invite and placed 18th, just outside the scoring. With that kind of speed, Maurer will be a huge boost to the Stanford men’s squad. The Cardinal jumped from fourteenth to seventh at the 2022 NCAA Championships and come into this season with lots of momentum. However, it’s getting increasingly tight at the top of the standings, and if Stanford wants to crack the top five in the next few years, they need more individual scorers.

When he gets to Stanford, Maurer will join a quickly rising distance group. The 2022 PAC-12 500 freestyle champion Preston Forst will be a senior. There’s also current freshmen Liam Custer and Henry Morrissey, who shine brightest in the mile (Custer’s time would have earned ninth at NCAAs last year). It’s a deep group now, and when Maurer arrives, it could be deadly. 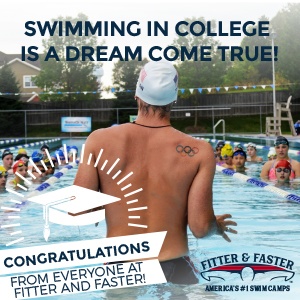