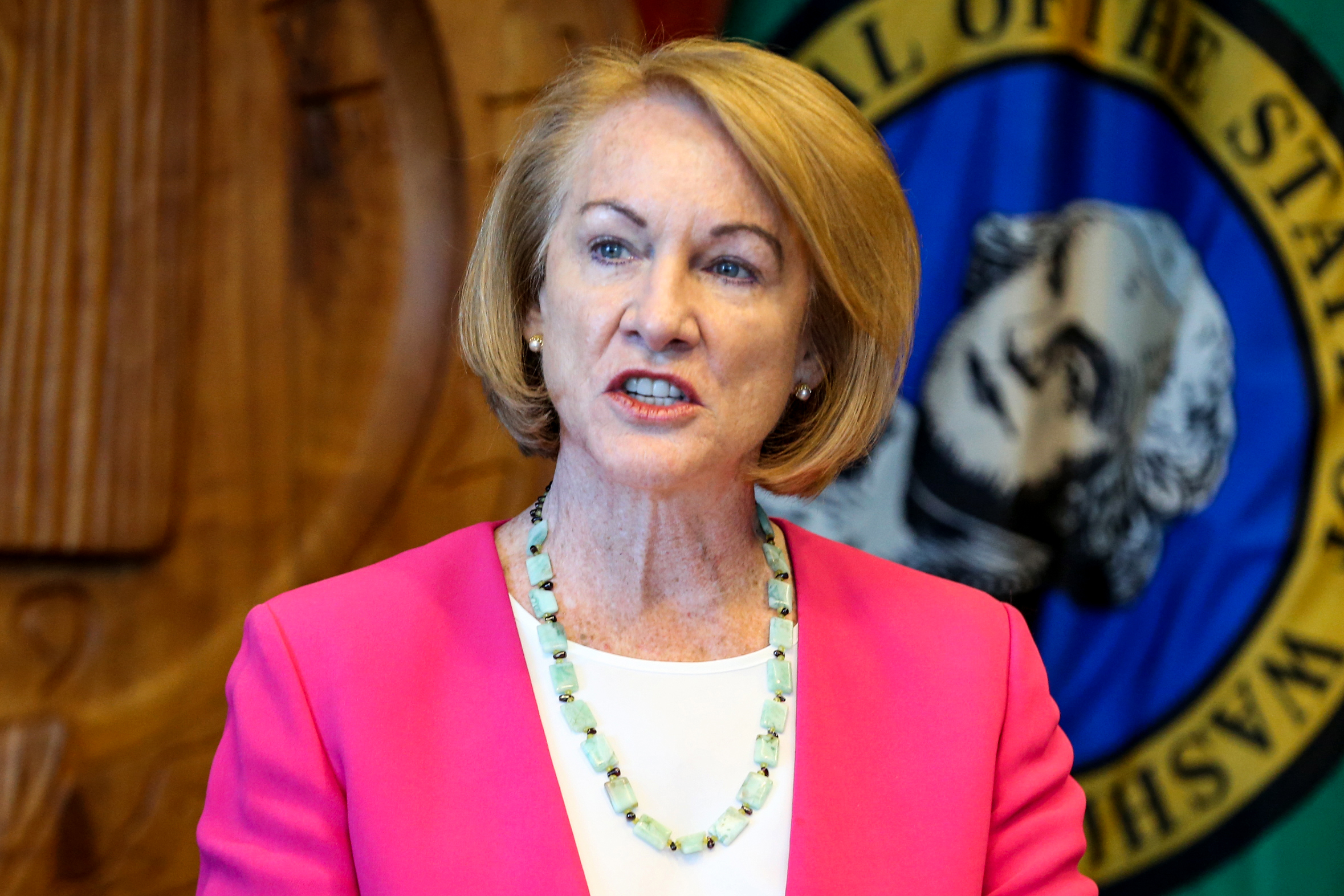 SEATTLE — A newly disclosed forensic analysis has found that 191 texts were manually deleted from an iPhone of former Mayor Jenny Durkan in the months after her administration’s controversial response to racial justice protests in June 2020, according to the latest filings in a federal lawsuit.

The previously unknown manual text deletions from Durkan’s phone — along with other new details, including that “factory resets” were performed on phones of six other city officials in fall 2020, resulting in the deletions of thousands of other text messages — are among the revelations contained in the findings of an expert’s 32-page report completed in April.

The expert’s report, along with a host of other exhibits, was filed in U.S. District Court in Seattle late Wednesday to bolster new arguments raised by attorneys for several businesses and residents suing the city for damages they say were caused by Seattle’s weekslong tolerance of a sprawling protest zone two years ago.

In an accompanying motion, attorney Angelo Calfo seeks a default judgment and sanctions against the city, contending Seattle officials intentionally destroyed potential evidence after the plaintiffs filed their lawsuit, which Calfo said could have helped prove the plaintiffs’ case.

The motion alleges Durkan, former Police Chief Carmen Best, Fire Chief Harold Scoggins and several other Seattle officials intentionally deleted thousands of text messages “well after this case began and in blatant disregard of their duties as public officials to preserve their texts.”

“The City’s explanation for … why the officials deleted the texts—using factory resets, 30-day auto deletions, and manual deletions—are either non-existent or incredible,” Calfo’s motion states. “There’s only one plausible explanation. These officials intended to deprive Plaintiffs of crucial evidence, prejudicing Plaintiffs’ case and rendering the City’s defenses difficult to rebut.”

Seattle City Attorney Ann Davison’s office, which is defending the city, declined comment about the latest filings Thursday, but countered by filing the city’s own motion for sanctions against the plaintiffs, including business owners, landlords and residents, for allegedly destroying evidence.

It claims at least two of the plaintiffs “deliberately, manually deleted their text messages about” the protest zone after the lawsuit was filed, “when they knew they were obligated not to do so, and have done nothing to retrieve them.” Several other plaintiffs used an encrypted messaging app with “disappearing” messages to discuss the protests, the city’s motion states.

Durkan, a former U.S. Attorney who did not seek re-election after her single term as Seattle’s mayor ended last year, said through a spokesperson’s statement Thursday most of her texts, which were “mostly innocuous and irrelevant,” were recovered. The statement said she believes “strongly in the public’s right to know what their government is doing.”

“The lawyers’ motion is a purposely inaccurate and misplaced ‘Hail Mary’ attempt to save a case that lacks merit,” the spokesperson said.

Durkan previously has denied intentionally deleting any of her text messages or changing any phone retention settings to automatically delete them.

The city recovered or recreated many texts, but those exchanged among key decision-makers during the height of the protests have been lost.

Best, who abruptly retired as chief in the wake of the 2020 protests, did not return phone and email messages. Best initially told reporters she didn’t know how her texts were lost, but testified in a deposition for another case in May that she periodically deleted her texts in bulk after deciding they didn’t contain significant information requiring them to be saved.

The filings are the latest developments in a festering city scandal that has already spawned an ongoing probe by the King County Sheriff’s Office into whether any current or former city officials broke laws.

The dates of the city’s missing texts overlap with a several-week span in June 2020, when widespread protests erupted in Seattle over the murder of George Floyd by police in Minneapolis.

During that time, riot gear-clad Seattle officers used tear gas and violence to quell demonstrations before police ultimately abandoned a precinct station and the city allowed protesters to occupy six square blocks of Capitol Hill for more than three weeks. Several shootings, two of them fatal, and other violence and property crimes were reported within the free-protest zone before the city disbanded it.

The public first learned about Durkan’s deleted texts in May 2021 — after a public records’ officer’s whistleblower complaint prompted an ethics investigation that found the city broke the state records law. By then, several lawsuits related to the city’s handling of the protests, and dozens of public records requests seeking city officials’ communications from the time, had been filed.

Under public records law and legal evidence rules, the texts should have been preserved. Anyone who willfully destroys a public record that’s supposed to be kept is guilty of a felony punishable by up to five years in prison and a $1,000 fine, according to Washington law.

Last year, the city hired its own expert — Kevin Faulkner of the cybersecurity firm Unit 42 — to perform a forensic analysis and try to recover Durkan and Best’s missing texts.

When it was ultimately released in February, the long-overdue report had cost the city nearly $500,000 but didn’t recover any of their missing texts or answer several seemingly key questions about how they were deleted.

The city’s report found that thousands of Durkan’s text messages likely vanished because her phone settings were manually changed to automatically delete texts older than 30 days and to “disable and delete” an automatic backup storing texts in the cloud.

The phone setting changes occurred in early July 2020, around the time Durkan has said she inadvertently dropped her phone into salt water and the city’s IT department issued her a replacement phone, the report said.

But the city’s report didn’t determine who manually changed the settings that deleted the mayor’s texts, nor did it analyze how the texts of several other city officials — other than Best’s texts — disappeared.

The report from the plaintiffs’ digital forensics expert, Brandon Leatha, says it found evidence that, aside from the 30-day automatic deletions of 5,746 texts from the mayor’s phone, “an additional 191 messages were manually deleted between June 25, 2020, and November 16, 2020.”

Leatha’s analysis said the city reported that the resets, which deleted thousands more texts, were done because the officials had forgotten passwords or otherwise locked themselves out of their devices.

“The ‘coincidence’ of so many custodians losing passwords, resetting phones, and erasing iCloud backups is incredible,” the plaintiffs’ new motion states. “The changing stories, spotty memories, undisclosed manual deletions, and IT deviations from normal practice make intent even clearer.”

Calfo’s motion also asserts — based on Leatha’s findings, deposition testimony and other evidence — that Durkan reset her first phone and restored it with an old backup before turning it over to city IT personnel for a replacement in early July 2020.

Leatha’s report indicates most of the city’s texts were deleted after plaintiffs’ attorneys warned the city to preserve evidence for the lawsuit. It also said the texts could have been recovered had the city taken action to preserve phone data sooner than it did.

In a phone interview, Leatha told NBC News he based his analysis on the same data the city’s expert used for its report.

Faulkner testified in a deposition earlier this year that manual deletions from the former mayor’s phone “wasn’t something I was asked to look into and opine on” for the city’s report, according to a transcript also filed Wednesday by the plaintiffs’ lawyers.