Cristian Pache’s fun-loving style has injected the A’s with an unexpected level of excitement in a year that began with trading off most of the A’s stars. Tuesday night’s game was no exception with two highlight reel catches in which the new fan favorite – who already has a fan chant – popped up smiling and puffing up his chest towards the A’s bench.

His demonstrations break from the reserve nature of baseball, but in a season that may have a lot go right, it is a welcome sight for this A’s fan looking to celebrate the small things. His contagious smile and endearing silliness helps his celebrations feel genuine and good natured, rather than as showboating and ultimately off-putting. Mark me as a Pache fan.

Pache’s defensive wizardry in center field has drawn Andruw Jones comparisons, no doubt aided by coming up in the Braves organization, and his defensive prowess has been on full display through the first 12 games of the season. His twitter feed, which mirrors his playful on-field nature and is a must follow, is quickly filling up with defensive highlights. The stats also back up what we’re seeing with our eyeballs. Pache has already accumulated three Outs Above Average, which is tied for second in all of MLB or first among outfielders. We’ll need to see more to know if the comparisons to Andruw Jones are justified, but so far, he’s been unquestionably amazing in the field and that is almost certainly going to continue.

Unfortunately, Pache’s bat has not been performing as well as his glove. Pache’s slash line through Tuesday’s game sits at .208/.208/.354, which translates to just a 66 wRC+. It’s only 14 games, but there are some concerning trends, primarily the fact that he has yet to take walk — highlighted by his BA equaling his OBP.

Pache is not walking for one simple reason: He swings outside the zone too much. Pache currently ranks 18th in swing percentage at 53.7%. This might be fine if that ranking was coming from swinging at strikes, however, his in-zone swing percentage is relatively modest (69.7%, tied for 79th out of 177 qualified hitters) and it is his out-of-zone swing percentage that is too high (42.9%, ranked 5th highest). Still this high swing rate might be OK, if Pache was making a lot of good contact in the zone or fouling off pitches out side the zoom. However, his contact rate on both out-of-zone and in-zone pitches (ranked 99th and 96th of the same 177 batters, respectively) is not good enough to make up for his lack of selection.

Pitchers are already feeding Pache fewer strikes than most batters (40.2%, tied for 107th), but unless Pache adjusts, that strike percentage may drop even further. On the other hand, Pache may just be pressing and trying to do too much in his new home. In 2019 and 2021 at AAA, he posted 8.6% and 8.5% walk rates, respectively. So, being handed a starting role on Opening Day may just be getting the better of him. Or it could just be small sample sizes — we are only talking about 48 plate appearances and generally we’d prefer 100 PAs before making any judgements.

Another silver lining in Pache’s 14 games of work is his batted ball profile. Though his slash line isn’t showing it, when Pache has hit the ball, he has hit it very hard. Pache’s average exit velocity (EV) is 90.5 — good for 42nd in baseball — with an average launch angle (LA) of 1.9. These batted balls, combined with his walk rate, have only yield a .249 wOBA thus far, but his expected wOBA (or xwOBA) is .315. That number is just OK, but it is heavily burdened by the lack of walks. Removing the walk effects, Pache has an xBA of .266 and xSLG of .487. Those numbers are not bad. But they also might be based on something unsustainable – we are only about one third of the way to the stability point for EV.

I’ve plotted below what Pache’s exit velocities and launch angles look like compared to league average wOBA on those balls in play, which are colored by their result. He’s clearly missing a few potential hits, but it also highlights how a little higher launch angle would really help him. This lower launch angle matches scouting reports, which peg Pache as more of a line drive hitter.

Pache’s balls in play overplayed on league average wOBA by EV and LA.

Putting his plate disciple and these batted ball data together, I’ve plotted the xwOBA of each of his balls-in-play versus the pitch location (left panel below). Though he’s hit one of the balls out of the zone fairly hard, none of have gone for a hit yet. In fact, he hasn’t hit anything in the upper third of the zone with any authority yet. It’s far too early to know if that’s a meaningful result or not, but not swinging at pitches four-plus feet off the ground seems like low hanging fruit. 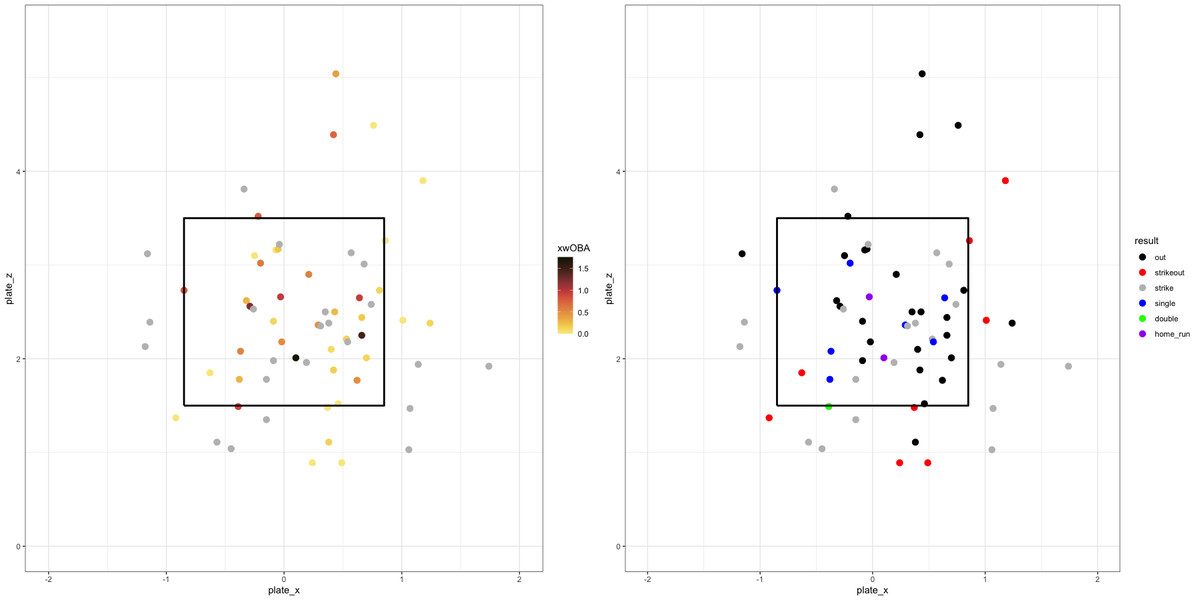 There is a lot to like from Cristian Pache so far — the joy that he brings to the game, the spectacular catches and a few very hard-hit balls have all been bright spots for an A’s organization that is engulfed in a fog of controversies so thick you could chew it. His play is a welcome distraction that has likely helped make him an instant fan favorite. But he’s got to adjust his game and start taking some more pitches before his hitting will improve and for his performance to catch up with his aura.

The batted ball profile is good, but he — and we — can’t count on him keeping these exit velocities up. His current xSLG (.487) is a significant amount above anything he put up in AAA (.411 and .414 in 2019 and 2021). His slash line is so bad, however, that his expected stats could go down and his real ones could go up, particularly if he can start taking his walks.

I’ll continue to keep my expectation for his bat low. Luckily though, with elite defense in center, a slightly sub-par hitter would be a very valuable player overall. Add in his likability and I’m happy to watch Pache play, and hopefully improve, as the season goes on.

Is this the A’s starting rotation to open the 2022 season?