On June 4th, Sean Murphy came to the plate three times and struck out all three times. After the game, his slash line sat at .193/.271/.365. Thanks to offense being down across the league and park factors, however, that was still at least good for an 85 wRC+, a small consolation for A’s fan watching their best hitter flounder at the plate. Through this date in early June, Murphy’s swing seemed slow — a perception was backed up by a career high 27.6% strike out rate. And during a year when homers were well behind recent averages, he was selling out to pull the ball, pulling 46.5% of his batted ball, his highest mark since a 60 PA season in 2019.

Those three strike outs on June 4th – the first and only time this year he struck out in all his plate appearances – may have sparked an adjustment in his approach or swing. Because since that date, Sean Murphy has been on an absolute tear. His slash line from June 7th through yesterday stands at an impressive .304/.382/.520, good for a 164 wRC+, tied for 8th best in MLB over that time. It may not be surprising that this marks the best performance of two months or more in Sean’s career, highlighted by the 60-game moving average of his wOBA below.

But to A’s fans accustomed to watching Murphy swing and miss or loft lazy fly balls to left field, it is how he’s turned into one of the game’s best hitters that is the most surprising. Since his low point in early June, Murphy has cut his strike out rate nearly in half, to an even 15%. His BABIP (batting average on balls in play) is also up to .324, from a career level of .276.

These changes might sound unsustainable in the long term if it weren’t for two other factors. First, Sean Murphy is hitting the ball in the air less. His average launch angle before June 4th was 14.4 degrees, similar to his two previous seasons, while after it has been 11.3 degrees. Murphy’s fly ball rates over these times were 43.3% and 35.8%. As we all probably know, BABIP is higher for ground balls than fly balls. The graph of a 60-day moving average below shows the recent change in FB-GB splits. 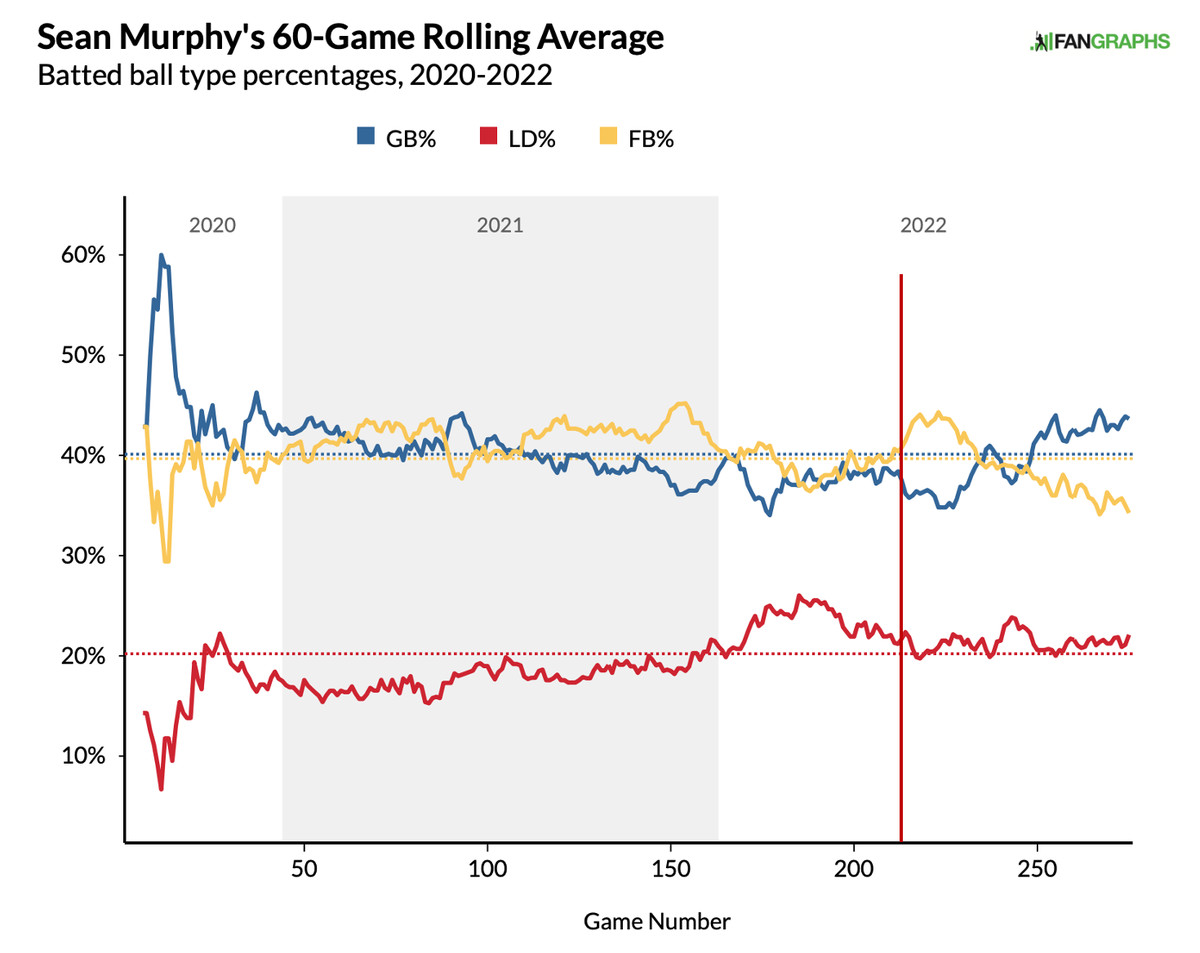 Secondly, to pair with a lower fly ball rate, Murphy is starting to hit the ball the other way more. Murphy’s pull percentage dropped from 46.5% through June 4th, to 36.8% after it. Additionally, other teams may have taken note of this change, as prior to June 4th Murphy was shifted on 53.7% of plate appearances, compared to 32.4% after it. This suggests he’s not attempting to pull a ball for a home run as much and instead taking what the pitcher is giving him – and, given his increase in wOBA, it appears to be working. The chart below of his Pull-Center-Oppo profiles over time. 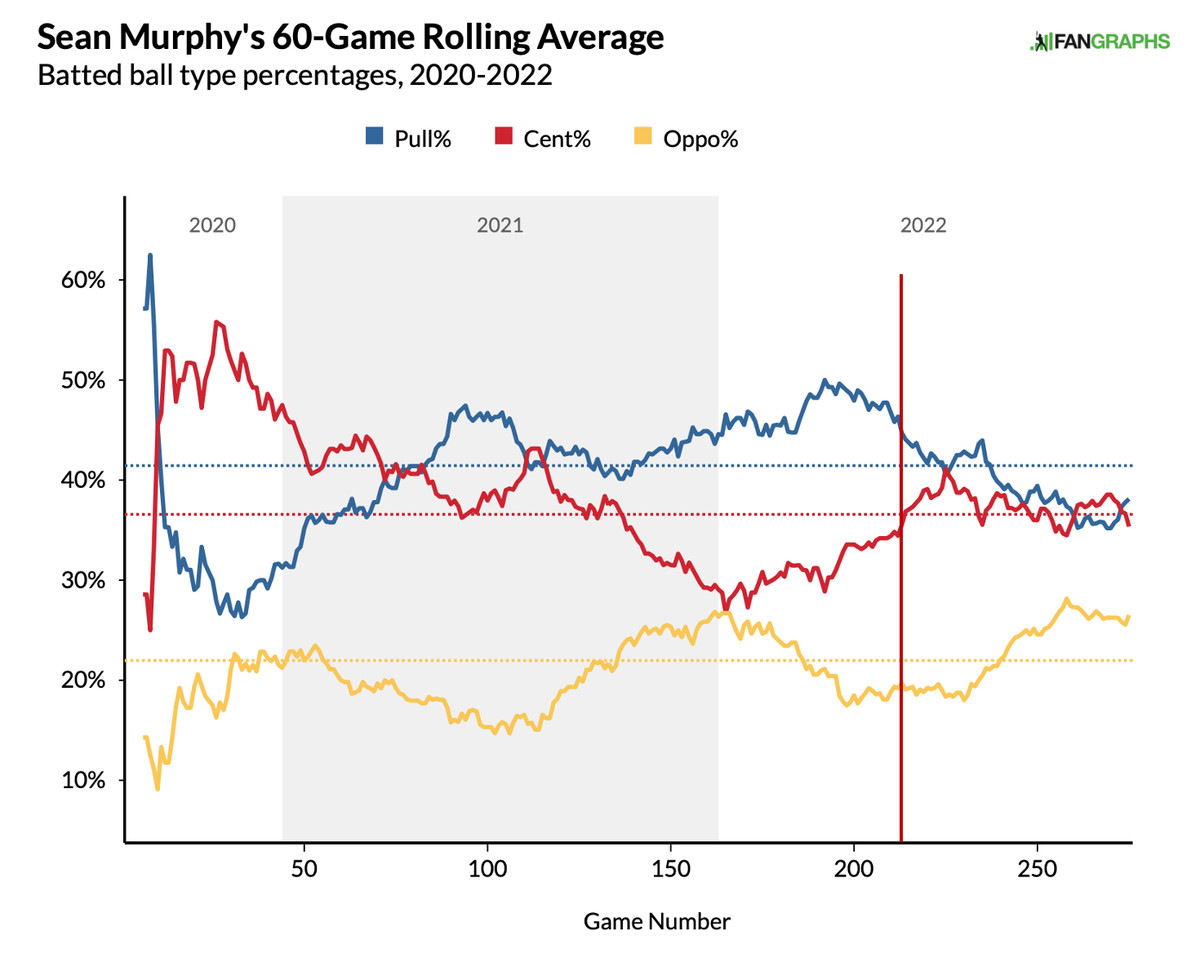 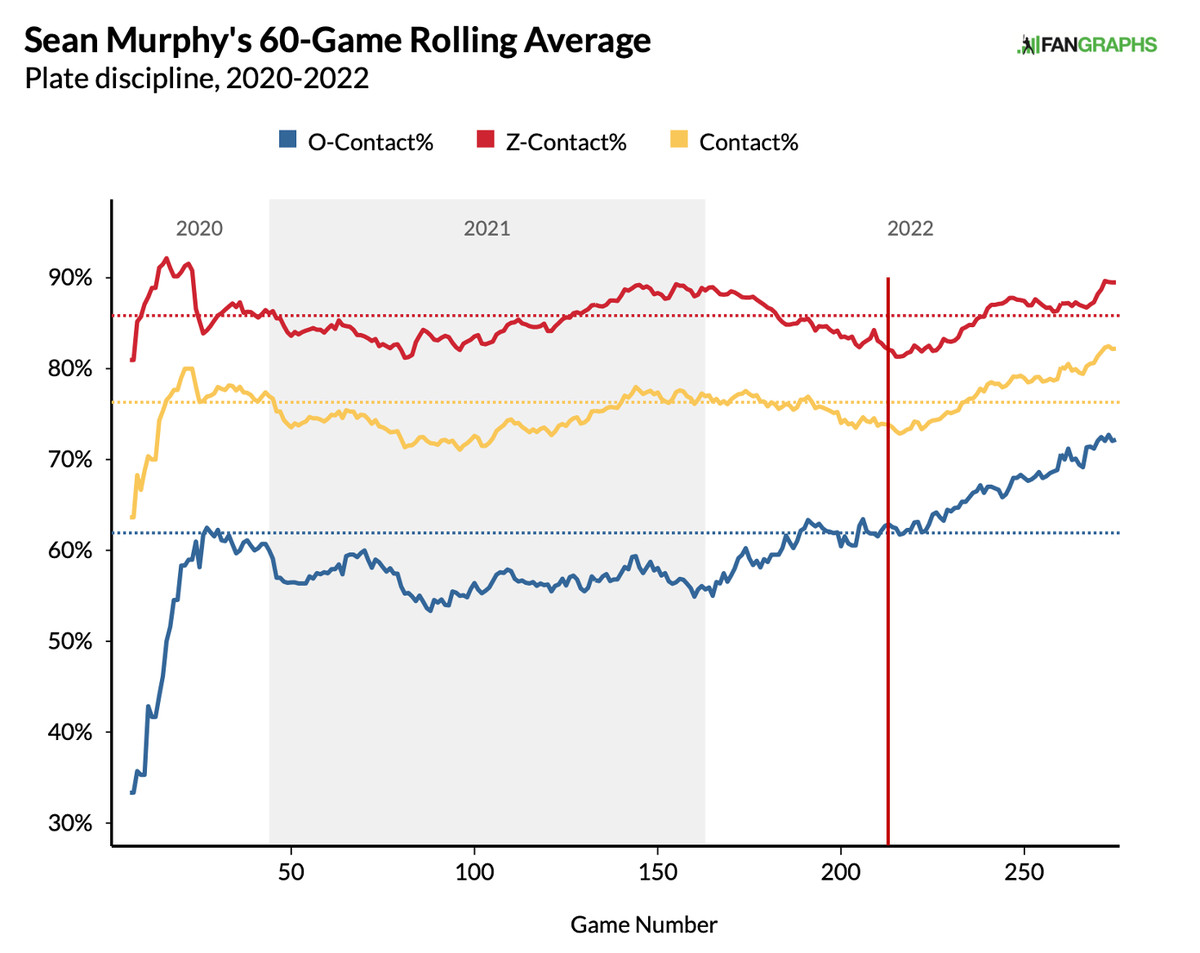 The change in his contact rate has not been evenly spread through out the zone, however. Instead, he appears to have changed his swing and/or his approach in a way that allows him to reach balls up in the zone and on the outer half or even off the plate outside. Shown below in the top row, Murphy has increased his contact rates after June 4th in nearly all segments of the strike zone except down and in. He’s also increased his contact rates outside the zone, particularly down and away. All this added contact is not going to waste. Post June 4th, Murphy is now drive a balls up in the zone or outside with more authority (shown in the bottom row by changes to wOBA). Murphy still appears to have trouble with the ball down and in, but on balance, it is clear how this new approach is big improvement. 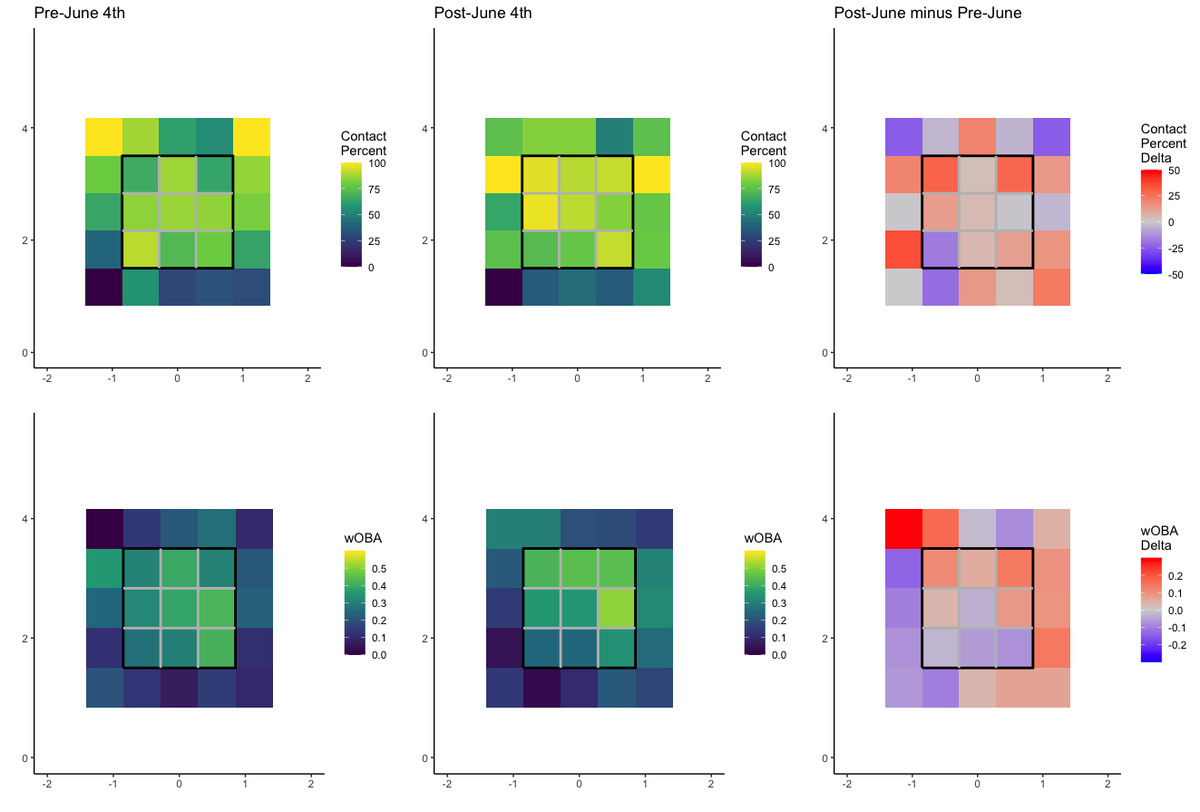 Now, to be fair, a good chunk of Murphy’s improvements have come from a positive regression in HR/FB. Early in the season, due to cooler weather or a less bouncy ball, or both. Fly balls were not leaving the yard like the used to. Murphy’s flys were no exception and he had just 9.1% of his fly balls end up as homers prior to June 4th, compared to a career average of 15.8%. After June 4th, that number has climbed back to 16.2%, almost exactly his career average. However, it is probably not an accident Murphy’s only opposite field homer came after June 4th. Maybe even more impressive, five of his 16 doubles since that date have also come going the other way after June 4th, while only one of his 14 doubles were to the opposite field before it.

It was not then a sudden burst of power. Nor even a return to >10% walk rates (his walk rate has been flat ~8% all year). No, Sean Murphy found the opposite field and his has propelled him to become one of the best hitters in the game over the last two and half months. With his prolonged hot streak and his continued defensive excellence at catcher, Murphy has now accumulated 4.2 fWAR, already the highest mark of his career on only August 24th. That mark ties Murphy for 18th on the WAR leaderboard with Xander Bogaerts.

This break offensive break out could not be better timed, either. Murphy’s eventually replacement, Shea Langeliers, is already doing well on the MLB roster and a trade involving Murphy in the off season seems inevitable. Though we all hate to lose our stars, hopefully for A’s fans, Sean can keep this hot streak going and maximize the amount of value he could represent in trade. For now, however, we should all try to enjoy Sean’s outstanding hitting.