Considered to be one of the most successful hockey teams in the world, the Indian hockey team and the players never fail to impress. Here is a list of such players who scored the highest number of goals for India at the World Cup across each edition.

With three goals each, Simranjeet Singh and Lalit Upadhyay Kumar led the way for India.

Akashdeep Singh finished as the top goal scorer for India and 7th on the overall list with 5 goals. In 2010, Sandeep Singh finished 12th overall and was India’s leading goal scorer with 4 goals. He holds the record for the fastest drag-flick at 145 mph. Shivendra Singh was India’s top goal scorer at Monchengladbach, Germany, with four goals to his name. He finished 14th on the overall list. Baljit Singh, Daljit Singh, and Deepak Thakur of India had scored 4 goals each and were India’s top goal scorers at Kuala Lumpur.

Mukesh Kumar finished as the highest goalscorer for India in the second consecutive World Cup with four goals.

Sebastian Jude Felix and Jagbir Singh scored 3 goals each and were India’s top scorers at the 1990 edition in Lahore, Pakistan. India finished 10th overall in the World Cup.

Rajinder Singh was the highest goal scorer both, for India and overall, with 12 goals to his name. He holds the record for being the only Indian to have ended up as the lead goal scorer of any edition. Victor J Philips was the highest scorer for the defending champions with three goals in the 1978 edition as India finished sixth in a disappointing campaign.

In 1975, India won their first and only title in Kuala Lumpur. Mohinder Singh was India’s highest goalscorer in the edition with 4 goals. 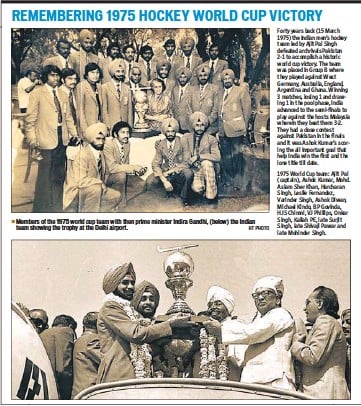 India was runners-up in the second edition of the Men’s Hockey World Cup. Surjit Singh Randhawa was India’s highest score in the tournament with 6 goals. He scored two goals in the finals against The Netherlands to drag the game to the penalty shootout Surjit Singh Randhawa battling it out with the Dutch players in the finals of 1973 WC.

Rajwinder Singh was India’s top scorer in the inaugural World Cup, which took place in Barcelona, with three goals. India finished in third place in the tournament.