It’s the penultimate night of finals in Irvine, and we’ve got finals of the 400 free, 100 breast, and 100 back slated to race tonight.

Erin Gemmell continues to shine at this meet, posting another personal best in 4:08.69 to lead the field for tonight’s final. Gemmell set a personal best in the 200 free prelims, then went faster at night, so she could have more left in the tank. Lots of swimmers posted personal bests to make the final, including distance star Kensey McMahon. She swam 4:09.39 to break 4:10 for the first time in her career.

Claire Tuggle continued her resurgence this morning, getting back under 4:10 for the first time since 2019. These three swimmers will have to fend off Maddie Gough, who entered with a 4:05.60 and cruised to the fourth seed this morning in 4:10.03. Without Katie Ledecky who opted not to enter this event, we’re set for a tighter race for gold than we usually see. 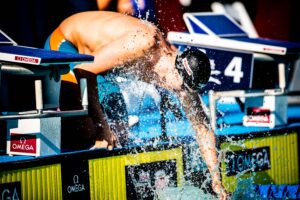 Speaking of tight races, we’ve got one brewing here in the men’s 400 free. This field is crowded with NCAA stars, and new Florida Gator Jake Mitchell leads the way. He was the only swimmer under 3:50 this morning, but Olympic bronze medalist Kieran Smith holds the fastest PB in the field. Given how Florida has been swimming this week, expect both to be faster tonight.

The Gators are in the middle lanes, but don’t forget the rest of the field. With Jake Magahey, David Johnston, and Luke Hobson, and Will Gallant flanking them, they should be pushed the whole way. Magahey and Hobson stood on the 200 free podium with Smith, and Gallant and Johnston went 1-2 in the 1500. Throw in distance star Bobby Finke, and this is the middle ground between the mid-distance and pure distance stars, which means the race strategies will vary wildly. Don’t count out someone just because they aren’t leading at the 300. 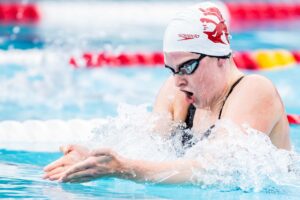 Kaitlyn Dobler was in a field of her own this morning, posting 1:07.71 to qualify first by nearly a second. Dobler has a personal best of 1:06.19, and if she shut down this morning, she could win tonight by a decent margin.

There’s a great battle taking shape behind Dobler as well. Hannah Bach, Talera-Jade Dixon, and Olivia Anderson are sitting within two-tenths of each other, with Emma Weber not far behind.

200 breast champion Mackenzie Looze might trend more towards the 200, but Indiana is swimming well at this meet, so we can’t discount her here. Speaking of the 200, Zoie Hartman won the B-Final, swimming her first personal best in five years in that event. Here, her best is a 1:07.31 from 2019–watch for her to make a run at that tonight. 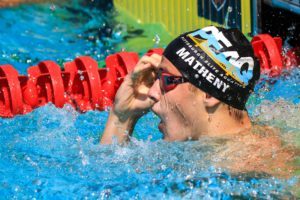 Josh Matheny continued Indiana’s success with his 100 breast. He put up 59.86, a huge personal best and his first time under the 1:00 barrier. He’ll have his hands full tonight; Caspar Corbeau, Max McHugh, and Kevin Houseman have been under a minute before in their careers as well.

Like Indiana, Minnesota and Auburn have also been having great meets and McHugh and Reid Mikuta will both be trying to keep that momentum rolling. Mikuta put up a lifetime best 1:00.92 to grab seventh spot in the final. He’ll likely need to break 1:00 to make a push for a medal, but another drop certainly isn’t out of the question. 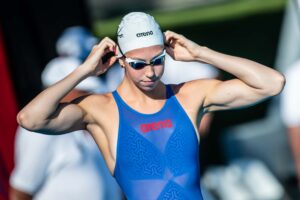 This should be a phenomenal race. Occupying the top three spots are Isabelle Stadden, the 200 back champion, Rhyan White, an Olympian in this event, and Gretchen Walsh, the 100 fly champion who continued her breakthrough meet by cracking 1:00 for the first time in prelims.

Ohio State’s Amy Fulmer also broke 1:00 for the first time, making it four women under the mark in prelims. There’s also Claire Curzan, who’s still in the mix even as she deals with a non-COVID illness, and Dutch sprinter Kira Toussaint to keep an eye on. Look for Walsh and Toussaint to take it the race to the field, then try to hang on against surges from swimmers like Stadden and White. 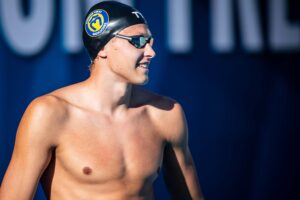 Justin Ress topped the field this morning, hitting 53.50. Adam Chaney was the only other man under 54 seconds in the heats, getting close to his personal best in 53.97. A valuable member of the Florida NCAA team, we’ve been waiting for Chaney to break out in meters for a while now. Could this be the race?

It’s a tough field, with Jack Aikins, Leon MacAlister, and Destin Lasco. Aikins has been open about his lack of experience swimming outside. He bumped the lanelines during his winning performance in the 200, and a mistake like that again could cost him in this shorter race. Lasco hit a lifetime best in his 100 free earlier in the meet, indicating that his sprinting is on form.

'Batgirl' directors say they are 'saddened and shocked' after Warner Bros. shelves their movie