There were only two scratches for the last finals session of the 2022 U.S. National Championships in Irvine. The highest seeded scratch came from #5 Catie DeLoof of New York Athletics in the women’s 50 free who came within .40 of her entry time in prelims This was her last event of the meet. First alternate Charli Brown from Sun Devil Swimming also dropped the 200 IM, her last swim of the competition.

In a Ledecky-less 1500 free final, Texas’ Erica Sullivan, the 2020 Olympic silver medalist in this event is the top seed. She is followed by Scottsdale Aquatics’ Sierra Schmidt who competed in the 400 free and 800 free ‘A’ finals earlier. Australia’s Maddy Gough is also in the mix alongside Alabama’s Kensey McMahon who placed 3rd in the 800 free final. Watch out for 14-year-old Kayla Han of La Mirada Armada in lane eight, she has a double-swim tonight after making the 200 IM ‘C’ final this morning after becoming the 27th all-time fastest 13-14-year-old in the event. 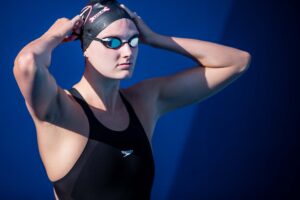 Next up will be the women’s 200 IM led by Zoie Hartman of Athens Bulldogs and Justina Kozan from Mission Viejo. Both swimmers notched best times this morning, including Kozan’s major time drop of 1.5 seconds. Her strategy this morning was to play into her biggest strength, butterfly, and demolish the field on the freestyle. It worked to say the least, 10 swimmers were faster than Kozan at the 150 mark and she beat eight of them with her stellar freestyle split of 29.70. Watch out for Tokyo Olympian Leah Smith and Wisconsin’s Beata Nelson, though, both of whom have posted 2:11’s before. Hartman’s prelims time was a 2:13.32. 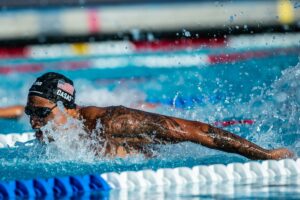 In the men’s 200 IM, nobody came close to Longhorn Aquatics’ Shaine Casas. He was especially dominant on butterfly, touching the wall .5 before anyone else (no surprise there as he won the 100 fly earlier). While multiple of the finalists have broken 2:00.00 before, it proved to be a hard benchmark to break for most of them this morning. Only Casas and 2nd seed Grant House of Sun Devil Swimming beat it. The rest of the field was tight – La Mirada’s Kevin Vargas dropped 1.8 seconds to threaten the 2:00.00 mark with a 2:00.10 and 4th seed Baylor Nelson from SwimMAC Carolina touched the wall .03 behind him. Nelson and 5th seed Max Litchfield outsplit Casas on the backstroke and the freestyle. While it might still be a Shaine Casas show tonight (he holds the 7th all-time fastest time in American history at 1:56.70, about .8 faster than his prelims swim), watch out for Litchfield and Nelson who are the only swimmers who have broken 2:00 before in this pack, besides House. 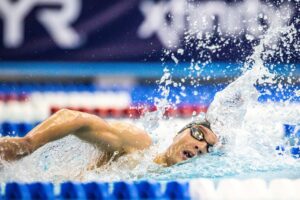 The fourth event this evening is the mens 800 free highlighted by Bobby Finke, the 2020 Olympic gold medalist in this event. Finke hasn’t raced much so far in Irvine after scratching the 1500 free on day one, placing 11th in the 400 IM but scratching finals, and most recently placing 4th in the 400 free final. He might have good competition from Wolfpack Elite’s Will Gallant, the 2nd seed, who won the 1500 free earlier by dropping 14 seconds from his lifetime best time. The Swim Team’s David Johnston is ranked 3rd in this final. All three of them raced together in the 400 free final on Friday night.

The meet will conclude with the 50 freestyle which is truly anyone’s on both the men’s and women’s sides. Polish Olympian Katarzyna Wasick posted the fastest women’s time this morning, but only .10 faster than 2nd seed Gretchen Walsh of Nashville Aquatics. We can’t underestimate two-time Olympian Abbey Weitzeil or Louisville’s Gabi Albiero, seeded 3rd and 4th, either. Albiero especially has been on a roll at this meet, crushing the #21 all-time fastest 100 butterfly time in American history on Thursday. 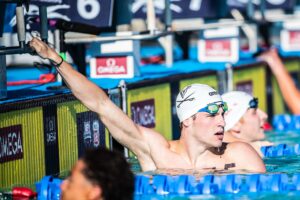 Matt King of Cavalier Aquatics surprised the field in the men’s 50 free this morning by taking .39 off his lifetime best time from earlier this month to be the only man under 22.00 (21.95). Adam Chaney and Jack Dolan are seeded 2-3 and are separated by a mere .02. Look out for Michael Andrew, a Tokyo Olympic finalist in this event, and Justin Ress who went into prelims seeded 1-2 but are entering the final ranked 7th and 4th, respectively.