America’s hopes of medaling in the women’s 100 free at the Tokyo Olympics last year were thwarted when Simone Manuel, the greatest U.S. women’s sprinter of this generation, failed to make the final at 2021 Olympic trials. She later revealed that she had been suffering from overtraining syndrome for the majority of her season, and just recently, we found out that she wouldn’t be competing at U.S. trials this year.

With their best sprinter out of contention, who does Team USA turn to now? Are they ever going to catch up to Australia, who beat them by three seconds in the 4×100 free relay last summer?

To fill Manuel’s shoes is an incredibly difficult task. She’s the 2016 Olympic champion, the 2017 and 2019 world champion, and the American record holder in the 100 free (52.04). In fact, she remains the only American woman to have medaled in this event at Worlds since Natalie Coughlin tied for silver in 2005.

Mallory Comerford (52.59) and Abbey Weitzeil (52.99) are two other American women aside from Manuel to have gone under 53 seconds in the event, and Comeford hasn’t been near that mark for years. Considering that it’s going to take 51-highs or 52-lows to medal individually, expect a long podium drought for the Americans if nobody else steps up.

But the lack of up-and-coming stars in this event isn’t exactly a problem for Team USA. In fact, the large pool of talent in this field has made the question of who will be the top women’s 100 freestyler a heated topic of discussion, to the point where we recently issued a poll to our readers asking who would win the event at U.S. trials.

In that poll, Claire Curzan took the most votes at 26.6%, followed by Kate Douglass at 23.6%, Gretchen Walsh at 21.8%, and Abbey Weitzeil at 18.8%. The majority of votes being almost evenly split being four different people just shows how wide open this event is going to be.

America has many sprinters who are in the 53-point range. And although a 53 is good enough to make the Worlds team, it’s just a matter of who’s going to be the next one to make that leap from a 53 to a 52. And while we might not necessarily see a 52 at trials, the 100 free race in Greensboro is an important set up for what’s to come this summer in Budapest.

Contenders for this event can be separated into two categories: those who have represented the USA in the 100 free and the 4×100 free relay at past Olympics or World Championships, and young guns who seem to have an endless ceiling of possibilities.

So let’s talk about Claire Curzan, the fan-favorite according to our poll. The future Stanford swimmer has been impressing us race after race at recent TYR Pro Swim Series stops in Westmont and San Antonio, and holds the top time in the country this year (53.68).

Last June, Curzan finished 12th at Olympic trials with a time of 54.39, but was nearly a second faster a month before when she set her personal best of 53.55. In fact, this was a trend across all of her events, as she added from her entry time in 50 free and 100 fly as well.

With more experience tapering for major meets like trials, it will be easier for Curzan to put last year behind her and get herself a spot on the worlds team in the 100 free this year.

Then there’s Gretchen Walsh. When she was a sophomore in high school, she went a 53.75 en route to winning a gold medal at the 2019 World Junior Championships, igniting the hope that she could be America’s next greatest sprinter. However, that 53.75 still remains her best time even after three years, and she was two seconds slower when she didn’t make it out of the heats at Olympic trials and finished 28th.

Since her disappointing trials meet, Walsh made a shift in her training environment when she began racing for the University of Virginia collegiately. She’s improved in all of her events in yards this NCAA season, including dropping nearly a second in the 100 free when she won the national title with a time of 46.05. In fact, she told SwimSwam a few weeks before NCAAs that she experienced major improvements in her training after coming to UVA.

“I felt a certain way at junior worlds that I haven’t felt again since I got to UVA. I feel so good in the water, my strokes feel so efficient…everything I’m doing feels correct.”

Walsh went a 56.00 at a UVA time trial this year, which is a time that may seem pedestrian for her standards, but don’t let that fool you. Based on her performances at NCAAs, expect to see a reinvigorated Gretchen Walsh in Greensboro next week.

Training alongside Walsh at UVA is Kate Douglass, another contender in this event. Ever since her phenomenal NCAA performance this March, Douglass’s stock has risen a significant amount in long course. Although her best time is only a 54.14 from when she finished seventh at trials last year, she’s exceeded our expectations so many times this year to the point where we have no idea what she will do next. 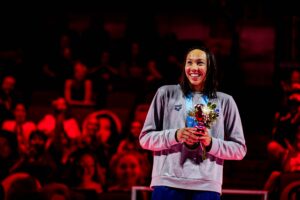 Our confidence in Douglass doesn’t just come from pure instinct. At the 2021 Short Course World Championships, she was a key contributor to America’s gold medal winning 4×50 and 4×100 free relays. She led off the latter relay with a time of 52.39, and even out-split long course world record holder Sarah Sjostrom on the first 50 meters of her swim. In addition, she clocked a 54.58 at the same UVA time trial that Walsh swam at, a very good time for where she was at in training then.

The final major challenger in this event who can be considered a “rising star” is Stanford’s Torri Huske. In fact, Huske has a faster best time than Curzan, Walsh, and Douglass, a 53.46 from April 2021. However, she had the same issue as Curzan of adding at Olympic trials, and ended up finishing tenth.

We haven’t seen Huske swim this event at all this year, as she only raced the 100 fly at the Pacific Open last week. However, in yards this year, she hit the milestone of breaking 47 for the first time and went a 46.82 leading off Stanford’s 400 free relay (she previously went 46.96 in the individual 100 free).

The 100 free being on the first day of the meet gives these young stars a fresh start to prove themselves in the race.

Even with the pool of rising young talent, Abbey Weitzeil is still the woman to beat. She’s been representing the United States alongside Manuel for a very long time, as she was on every USA 4×100 free relay since 2014, and competed in the individual 100 free at the 2016 and 2020 Olympics. Most recently, she set a new best time of 52.99 in the semifinals of the Olympics (she was 53.23 in the finals to finish eighth) to become the third American woman to break 53 seconds. That time also puts her as the top seed on the psych sheet.

Weitzeil’s season best is a 54.01 from the Fran Crippen Invitational, which ranks her second in the country this year behind Curzan. 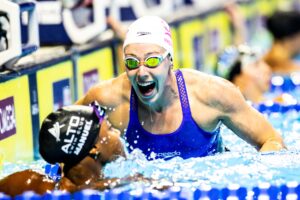 Erika Brown is the fastest American to have never been under 53 (and the fourth-fastest American of all time), holding a best time of 53.42 from the Tokyo US Open. Brown finished second behind Weitzeil at the 2021 Olympic trials, and then proceeded to finish 13th at the Olympics with a 53.58.

Although Brown may have been fast enough to finish second at trials last year, expect the number of 53-mid swimmers to multiply this year, making it hard for her to retain her spot.

Former Georgia training partners Natalie Hinds and Olivia Smoliga both swam in the in the 4×100 free relay at the Olympics last summer. Since then, Hinds went back to her alma mater at Florida to train under Anthony Nesty, while Smoliga joined Bob Bowman’s pro group at Arizona State.

Last year, Hinds and Smoliga finished third and fourth in at Olympic trials respectively, but tied for first in the semifinals with personal best times of 53.55. That time puts the two of them right up there with Curzan’s best time on the psych sheets. Although both of them are technically past their prime (Hinds is 28 and Smoliga is 27), their best times set just a year ago and their red-hot training groups say otherwise.

Another swimmer who changed training bases is Linnea Mack. The Team Elite swimmer has been training part-time in Switzerland this season, and swam in a few ISL and World Cup meets. She finished eighth at trials last year with a 54.32, but has a personal best of 53.78 from last May.

Catie DeLoof and Allison Schmitt, who represented Team USA in the prelims of the 4×100 free relay at the Olympics last summer, are not listed on the psych sheets and will not be competing at U.S. trials this summer.

Dark Horse: Katharine Berkoff– The NC State swimmer is more of a favorite in the backstroke races, but she had a major shift in focus to the sprints this college season, which culminated in her finishing seventh and third in the 50 and 100 free at NCAAs respectively. She holds a best time of 55.23 and is seeded 15th on the psych sheets, but big time drops in the sprints this season bode well for her in long course.