By Yanyan Li on SwimSwam

At the 2021 U.S. Olympic Trials, the top three in the women’s 200 IM were just .04 of a second apart, with Alex Walsh and Kate Douglass going 1-2 to make the Olympic team by a hair. However, the two dropped significant amounts of time from trials, which culminated in them taking the silver and bronze medals at the Tokyo games and being established as world-class in the event.

Walsh and Douglass’s Olympics performances, as well as a dominant NCAA showcasing in which they combined for six individual titles and four American records, make the Virginia duo the favorites to replicate their Olympic trials finish and qualify for World Championships this year. 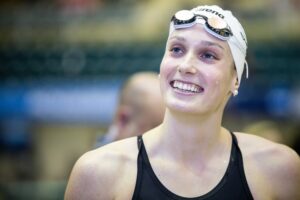 Alex Walsh, the reigning Olympic silver medalist, has established herself as America’s top IMer in the course of a year. She holds a best time of 2:08.65 from Tokyo, where she was just 0.13 seconds short of becoming an Olympic champion. Recently, she added another honor to her resume when she broke Ella Eastin’s NCAA, US Open, and American record in the 200-yard IM with a time of 1:50.08 to win a national title.

We’ve only seen Walsh swim the event in long course once this year, when she went 2:11.96 at an intrasquad meet last week, hence why possibilities for how she will perform at trials are endless. As the fourth-fastest American woman in the long course version of the event, Walsh just needs to drop a few more tenths to take down Kathleen Baker’s U.S. Open record of 2:08.32.

Walsh’s college teammate, Kate Douglass, isn’t too shabby either. Douglass famously ran down Madisyn Cox in the final 50 meters of the 200 IM to finish second at U.S. trials, and then did the same thing at the Olympics to snatch the bronze medal from Abbie Wood. Since then, she has also won herself a bronze medal at the 2021 Short Course World Championships, although her time of 2:04.24 (short course meters) from prelims would have been fast enough to win gold in the finals.

Despite the fact that Douglass broke three American records in her three individual wins at NCAAs, she didn’t swim the 200 IM at the meet – meaning we haven’t seen her full potential in the event. Holding a long course best time of 2:09.04, it is very likely that she will be able to dip under 2:09 this year and go 1-2 with Walsh once more. 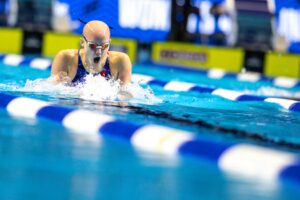 The fastest time coming into trials belongs to rising sixteen year-old phenom Leah Hayes, who clocked a 2:11.22 at the Westmont Pro Series in early March. A swimmer for the Fox Valley club in Illinois, Hayes just missed out on an Olympic trials final when she finished tenth in the semifinals with a time of 2:12.89. Since then, she has dropped 1.67 seconds in the event and will most likely be the top junior finisher at trials – rendering her a spot on the Junior Pan Pacs team.

Another junior swimmer who could make some noise in this event is USC commit Justina Kozan, a high school senior who swims under Mark Schubert‘s The Swim Team. She finished 44th at Olympic trials last year and was well off her best time of 2:11.55 from 2019, but then she impressed us all when she clocked a 2:11.96 at the 2021 Speedo Summer Championships a few months later. In that swim, she closed in a blistering 29.75 freestyle split, which was faster than the last 50 of all of the Olympic finalists from Tokyo. If Kozan can drop another 2:11 and close really fast once more, she is guaranteed to finish top 8. 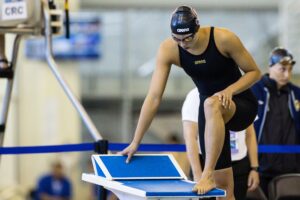 Stanford swimmer Torri Huske was largely overshadowed by Walsh in the 200 IM race at NCAAs this year, but she still swam a very fast time of 1:51.81 to place second. Although better known for her butterfly, Huske dropped nearly two seconds in the 200-yard IM this year. She finished fourth at trials with a time of 2:10.38, and her incredible versatility in both long course and short course could have her placing very high in the event.

However, there is a possibility that Huske will drop the 200 IM to focus on the 50 free, which happens on the same day as the 200 IM. In fact, the two events are only separated by the men’s 200 IM and the men’s 800 free, giving her around 15 minutes of time in between.

Huske did the opposite at NCAAs, going for the IM instead of the sprint despite having top 8 times in both events. Although, that was because the field in the 50 free at NCAAs was much more crowded than the 200 IM field. At trials, it will be a very different story. A 2:10 is fast, but it’s likely Huske won’t be able to touch Walsh or Douglass if she doesn’t go at least a 2:09-mid. On the other hand, Huske was third in the 50 free at 2021 trials, just 0.16 away from making the Olympic team in the event. This year, it looks to be a much more promising event for her, so avoiding a double so she can have a stronger 50 free wouldn’t be surprising.

Evie Pfiefer, who recently finished up her college career with Texas, couldn’t get out of the semifinals in the event at 2021 trials, finishing ninth with a time of 2:12.59. However, her best time of 2:11.53 could have easily been top 8.

Leah Smith, Beata Nelson, and Melanie Margalis come in as the trio of veterans looking to redeem themselves after missing the Olympics last year.

Margalis holds a best time of 2:08.70, a time that would have been fast enough to medal in Tokyo. However, that time was set back in 2017, and she hasn’t been able to hit that mark ever since.

A 2016 Olympic gold medalist, Margalis failed to qualify for Tokyo and finished 6th in the 200 IM at trials with a time of 2:11.7. However, she recently placed fourth behind Douglass in the event at Short Course Worlds and won a bronze medal in the 400 IM at the same meet. In addition, her recent change in training base from Georgia to Georgia Tech may bring positive change for her. Although the 400 IM is more her forte, there’s no doubt that the experience of multiple international meets under her belt will bring her good results in the 200 IM as well. 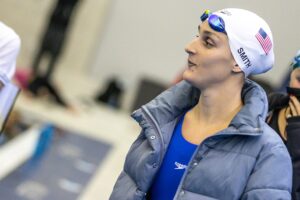 Leah Smith also recently switched training locations, making the move from Arizona to Texas last fall. She didn’t swim the 200 IM at trials, but put up a personal best time of 2:11.67 at the U.S. Open last December. We aren’t sure if she will be swimming the event though, considering that she could put her full focus on events like the 200 free, 400 free, and 400 IM where she has a better chance of making the team.

Although she used to be primarily a mid-distance and distance freestyler, she’s had some very impressive IM showcases after she began swimming for Carol Capitani, and could very likely avenge her failure to make the Olympic team with a worlds berth.

A star in short course meters and short course yards, Beata Nelson has never really made her way to international stardom in long course. She had a very successful season in the International Swimming League last fall, which included breaking the American record in the 100 IM with a time of 57.72. However, USA Swimming’s selection standards for Short Course Worlds, which prioritized long course times, snubbed her from racing at the meet.

Nelson finished seventh at trials last year with a time of 2:11.55 and has the second-fastest time in the country currently, which is a 2:11.76 from the Westmont Pro Series.

The biggest name from 2021 trials that won’t be swimming this year is Madisyn Cox. Last May, she put up a time of 2:08.51 at an in-season meet, which would have won gold at the Olympics. However, she was a bit slower at trials, going a 2:09.34 to miss a spot on the Olympic team by .02 of a second. She has since retired to go to med school, but if she was still swimming, she would definitely challenge Walsh and Douglass for a worlds berth.

Meghan Small and Emma Barksdale were both finalists at 2021 trials, but neither of them have swum at a meet since then. 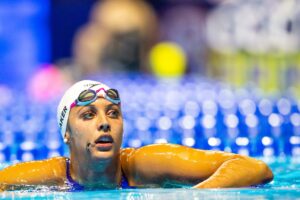 And what about Kathleen Baker, the U.S. Open record holder who holds a faster PB than anyone that we’ve just listed? Last year, she suffered a foot injury a month before trials, which affected her performances and caused her to miss out on Tokyo. She failed to make finals in the 200 IM, placing 12th with a time of 2:12.95, off her personal best of 2:08.32.

Baker has only swum in a few ISL meets after trials (she was entered in the San Antonio Pro Series, but ended up not swimming), and we have received no confirmation on whether she will be swimming in Greensboro in two weeks. But if she’s fully healthy and ends up showing up, we could have another contender in our hands.

Dark Horse – Katie Grimes: The Sandpipers of Nevada standout has a much better chance of making the Worlds team in the distance freestyles and the 400 IM, but her coach Ron Atiken recently told SwimSwam that the 200 IM would also be in her trials lineup. Her best time is a 2:15.77, a far shot from the best. But her recent success in the 400 IM, which includes posting a 4:00.66 in the event in yards at winter juniors, make us wonder what her potential in the 200 IM is.

Two Olympic Swimmers Build On Their Passion For Aquatics