Over a six-year span, from 2013 to 2019, Katinka Hosszu never lost the 200 IM at a major international meet. Nobody in recent years has been able to match her dominance, considering that she was the only woman to break the 2:08-barrier in the last Olympic cycle. All good things must come to an end, though, and the now 33-year-old Hosszu ended up finishing seventh at least year’s Olympics, being well off her world record best of 2:06.12.

With an end to Hosszu’s reign, who will be the future of the women’s 200 IM? The answer lies within the fastest two performers in the event since 2019: Alex Walsh and Kaylee McKeown.

Walsh staked her claim as the world’s best 200 IMer this year at April’s U.S. trials when she clocked a time of 2:07.84, becoming the fastest non-Hosszu performer in the 200 IM since Siobhan Marie O’Connor’s 2:06.88 from 2016 and the sixth-fastest performer of all time. Walsh’s outing at trials was a significant improvement from her previous best time of 2:08.65, which she set last year to take Olympic silver.

The University of Virginia sophomore is still relatively new to the international scene, with the Tokyo Olympics being her first major senior international meet (not including the 2019 Pan Ams). However, Walsh has established herself as arguably the most versatile yards swimmer in the U.S. right now, being elite in all four strokes and having recently broken the US Open, American, and NCAA record in the 200-yard IM with a time of 1:50.08. Walsh is now primed to further prove herself in long course, hungry to take the crown after being just 0.13 seconds away from the gold medal in 2021.

The one person who could challenge Walsh to the throne is located across the ocean from her, and that’s Australian phenom Kaylee McKeown. McKeown (born July 12, 2001), despite being the same age as Walsh (born July 31, 2001), can already be considered a veteran of international swimming. She’s headed to her third World Championships, and already has three Olympic gold medals and a world record under her belt. For her, racing the 200 IM at Worlds is answering a what-could-have-been question.

Last year, McKeown raced the 200 IM at the Olympic trials, setting a personal best time of 2:08.19. She dropped the event at the Olympics, instead opting to focus on the backstrokes, but her time ended up being faster than the time it took to win gold. This year, she added the 200 IM back onto her schedule as a piece of her goal to sweep both the backstroke and the IM races in Paris 2024. At Australian trials this year, she won this event in a season-best time of 2:09.15, which currently sits second in the world behind Walsh.

The one disadvantage that McKeown has in this race is the fact that she has the 100 back semis before the 200 IM, with only the men’s 200 free semis happening in between. Will she still be able to swim at her best with the double? 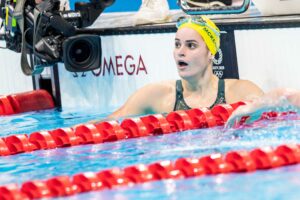 What could make this an incredible race between Walsh and McKeown is the fact that they both have a very strong breaststroke leg. McKeown, despite being a world-record caliber backstroker, actually pulled ahead of the rest of the field in the breast portion of both her 200 and 400 IM races at Australian trials. Walsh did the same thing, increasing her lead in the same stroke in her 200 IM races at U.S. trials and the NCAA Championships.

If you compare the splits of their best times, you can see that Walsh has nearly half a second on McKeown in the breaststroke. However, don’t be fooled: McKeown split an incredibly fast (under world record pace) 1:15.74 in the breaststroke portion of her 400 IM at trials this year, meaning she can definitely go faster than 37.34 in the 200 IM.

With the two swimmers sharing the same strong stroke, the race between them at Worlds could simply come down to who can deliver the quickest breast leg.

McKeown and Walsh are both swimmers with incredible range, and this event is where their abilities clash. The battle between them could be one of the fastest women’s 200 IM races that we have seen in a long, long time.

Japanese swimmer Yui Ohashi won this race in Tokyo in her home pool, swimming to a time of 2:08.52. That being said, she was also racing in a field without McKeown, and Walsh wasn’t a 2:07 caliber swimmer back then. It’s going to be significantly harder this year for Ohashi to defend her win from last year. However, you shouldn’t count out the Olympic champion. 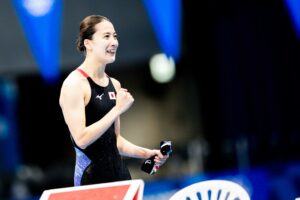 Ohashi has a season-best time of 2:10.70 from April 2022, which is ranked as the eighth-fastest in the world this year. Her best time of 2:07.91 makes her the only swimmer aside from Hosszu to go under 2:08 in the last Olympic cycle, although she set that time back at the 2017 Worlds and hasn’t been there since. She took silver behind Hosszu in the 200 IM at that meet. The last time this event was raced at the World Championships in 2019, Ohashi was DQed.

Sydney Pickrem took home her first World title when she won the short course version of the 200 IM last year at 2021 Short Course Worlds. She’s the defending bronze medalist from 2019 in the long course version of this event, and holds a best time of 2:08.61 set that same year. This year, she won the 200 IM at Canadian Trials, swimming a time of 2:10.58 that ranks her seventh in the world this year. The Canadian is ready to bounce back from a disappointing Olympics that resulted in her being off her best time and finishing sixth, and aims to get herself back onto the podium this year.

A pair of Chinese swimmers, Yu Yiting and Ye Shiwen, are notably missing from this field. Yiting, the 16-year-old, finished fifth at the Olympics en route to setting an unofficial world junior record in a time of 2:09.57. She also placed second to Pickrem at Short Course worlds last December. Shiwen, the fastest all-time junior in the 200 IM, has a best time of 2:07.57 from back when she was the Olympic champion in 2012. She hasn’t been near that time since, but did take silver at 2019 Worlds behind Hosszu.

Flipping in third at the 150 mark, Great Britain’s Abbie Wood was in bronze medal position in the 200 IM final at last year’s Olympics. However, she ended up being run down by Kate Douglass in the freestyle portion of the race, just missing out on a medal by 0.06 seconds to finish fourth with a time of 2:09.15. Since Douglass won’t be racing this event at Worlds this year, Wood has an opportunity to redeem herself in Budapest. She currently holds a season-best time of 2:10.64.

Wood’s teammate Alicia Wilson, who finished eighth in the Olympic final last year, was not named onto Great Britain’s World Championship team this time around. 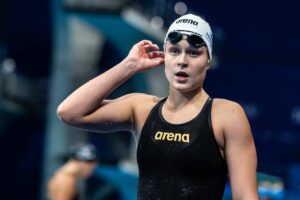 Another swimmer who benefits from Douglass’s absence in this race is 16-year-old Leah Hayes. She took second at U.S. trials in a new personal best time of 2:09.99, ranking third in the world this year behind Walsh and McKeown. In her first senior national meet, Hayes goes in with something to prove, and there’s a chance we could see massive improvement from her at worlds.

Sharing the same best time as Hayes, Israeli swimmer Anastasia Gorbenko rose onto the scene last year when she upset Hosszu last year to take home the European title in the 200 IM. She followed up on her win by placing 10th at the Olympics, just missing a spot in the final by 0.11 seconds. Later last year, Gorbenko won the 100 IM at Short Course Worlds. Gorbenko has a season-best of 2:10.43, which is ranked fifth in the world this year, and looks to take advantage of the absences in the field to final and potentially make the podium in this race.

Pickrem’s teammate, Marie-Sophie Harvey, has made huge jumps in the 200 IM this year. She finished second behind Pickrem at Canadian trials in a time of 2:10.98, a massive improvement from her previous best time of 2:11.93 in March 2022. Before this year, her lifetime best was a 2:11.96, a time she swam back in 2016 when she was a 17-year-old. After failing to make the Olympic team individually last year, Harvey is now on her way to her first World Championship meet since 2017.

Swiss swimmer Maria Ugolkova nearly broke the 2:10 barrier in the prelims of the Olympic games, swimming a best time of 2:10.04. However, she wasn’t able to match that time when she placed ninth semifinals and ended up missing the final by just 0.06 seconds. Ugolkova most recently swam at the Monaco Mare Nostrum stop, where she finished second with a time of 2:12.55.

And of course, we can’t forget about the Iron Lady, who is the world record holder and four-time defending world champion. Although Hosszu hasn’t been at her peak recently, she still swam a 2:10.75 at Mare Nostrum a few weeks ago to finish behind Gorbenko. And although she might be past the era in which she dominated every IM race, don’t count her out when it comes to making the top 8.

Dark Horse- Kristen Romano (Puerto Rico): Romano put on a big showing for Ohio State at the 2022 NCAA Championships, setting best times in the ‘B’ finals of the 200 and 400 IM that would have been good enough to place third in the ‘A’ final for both events. In long course, Romano has a best time of 2:12.86, which is faster than the FINA ‘A’ Cut. We saw her drop a lot of time this college season, so can she carry this momentum into this summer at World Champs?

Watch: Ian Grum Swims Fastest 200 Back in the Nation