Since 2016, Australia has dominated the women’s 4×100 freestyle relay. With the exception of losing to the Americans at the 2017 World Championships, the Australians have won the event at every major international competition and reset the world record 3 times.

If the Australians raced the same lineup in Budapest at Worlds, they would be the easy favorites to win the event. However, several roster changes have left some room for other countries to potentially sneak past them on the podium. In fact, the only member of the relay from Tokyo who will be competing at the World Championships is Harris, who finished 3rd in the 100 freestyle at the Australian Championships last month. Harris should be joined by Mollie O’Callaghan, Shayna Jack, and Madi Wilson, who also finished in the top 4 at that meet, assuming the coaches don’t elect to make any changes based off of other performances.

Even with the new lineup, the swimmer’s times from the finals of the Australian Championships still add to 3:31.37, which is a  second faster than any other team went in Tokyo last summer.

In 2017, the American team managed to win this race over Australia to claim World Championship gold. That team consisted of Mallory Comerford (52.59), Kelsi Worrell (53.16), Katie Ledecky (53.83), and Simone Manuel (52.14), who finished in a time of 3:31.72. This year, the lineup looks to be almost completely different, as the top 6 finishers at the US Trials were Torri Huske, Claire Curzan, Erika Brown, Natalie Hinds, Kate Douglass, and the aforementioned Comerford. The top 4 of those swimmers, Huske, Curzan, Brown, and Hinds, have a combined time of 3:34.14 based off of their times from that meet, leaving them several seconds shy of the Aussies. Though Ledecky could be thrown on to the relay due to her other performances, it is unlikely given her event schedule. Unless the Americans are able to throw down some huge personal bests, it appears unlikely that they’ll challenge the Austrailans this year. 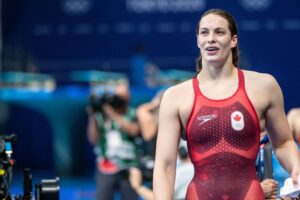 Australia’s biggest threat actually comes from the Canadian team, which has seen a fast rise of freestylers over the last few years. Led by 2016 Olympic gold medalist in the 100 freestyle, Penny Oleksiak, the Canadian women’s relay of Kayla Sanchez (53.42), Maggie MacNeil (53.47), Rebecca Smith (53.63), and Oleksiak (52.26) claimed the silver medal in this event in Tokyo last summer, swimming a time of 3:32.78. At the Canadian World Championship Trials, Sanchez, Oleksiak, Taylor Ruck, and Katherine Savard were the top 4 finishers in the 100 freestyle, making them the presumptive members of the race in Budapest. Though their times from that meet only add to 3:36.64, they have several swimmers who have thrown down much faster times in the past, including Oleksiak, the Canadian Record Holder, and MacNeil. Based on previous results, and the fact that she has already been as fast as 54.38 this season, MacNeil will most likely get the nod for this relay over Savard, despite not swimming the event at Canadian Trials. In addition, Smith finished 5th at trials, setting herself to potentially be added to the finals relay based off of performances. The wildcard factor for the Candaians may be superstar Summer McIntosh. Though she didn’t swim the 100 freestyle individually, she holds a personal best of 55.43 that she just set a few weeks ago un-tapered at the Mare Nostrum Swim Tour. If McIntosh is having a strong meet, she very easily could be given the chance to swim on at least the prelims relay and could produce some major drops on her split.

Great Britain’s roster boasts several strong young sprinters who all contested this relay in Tokyo, including Anna Hopkin, Abbie Wood, Lucy Hope, and Freya Anderson. In addition, the team will be joined by Medi Harris, who finished fifth at the selection meet. In Tokyo, Great Britain finished with a time of 3:33.96 to set a national record. Assuming they can come close to that, they may challenge for a spot on the podium and should be safely in the final.

In Tokyo, the Netherlands finished in 4th place, just off of the podium. That relay consisted of Kim Busch (54.64), Ranomi Kromowidjojo (52.87), Kira Toussaint (54.14), and Femke Heemskerk (52.05). However, since then both Heemskerk and Kromowidjojo, their two fastest relay swimmers, have retired from swimming, leaving a large gap for the team to fill if they hope to make the final. Both Busch and Toussaint will be swimming, and they should be joined by Marrit Steenbergen and Tessa Giele, who have already been as fast as 54.16 and 54.57 this year. The team also has Valerie van Roon, who has been as fast as 54.60 in her career. 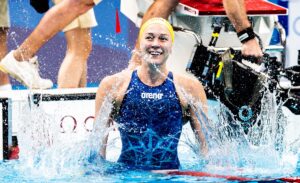 Sweden will return a majority of their relay, minus three-time Olympian Michelle Coleman, who contributed a 53.62 split for the team last season. However, they still boast World Record holder Sarah Sjostrom and the sibling duo of Louise Hansson and Sophine Hansson. It appears likely that Sofia Åstedt will be added to this relay in Coleman’s place. Astedt boasts a personal best of 55.38 that was just set in April. China is also missing one member of their relay from last summer in Wu Qingfeng, who was also the team’s fastest relay leg in Tokyo. However, Yang Junxuan posted a personal best 100 freestyle time of 53.42 back in September, which should make for an easy swap.

Though they finished 8th in Tokyo, Denmark is only sending 5 swimmers to the World Championships, missing powerhouse freestylers Pernille Blume and Jeanette Ottesen. Thus, it is unlikely that they’ll finish as high in Budapest, and the nation may not field a relay at all. Likewise, Japan will not field a relay at all in Budapest, despite finishing 9th last summer in Tokyo as too few swimmers hit the nation’s stiff qualifying standards.

With the absences of the countries above, Brazil looks to be next in line to make the final. The nation placed 12th at last year’s Olympic Games with the team of Larissa Oliveira (54.79), Ana Carolina Vieira (54.92), Etiene Medeiros (55.42), and Stephanie Balduccini (54.06) combining for a time of 3:39.19 in prelims. Both Vieira and Balduccini are on Brazil’s World Championship roster, and should be joined by Giovanna Diamante and Giovana Medeiros, who went 54.96 and 55.47 at Brazil’s selection meet, respectively.