Kaylee McKeown, Kylie Masse, and Regan Smith have a lot in common.

For starters, they are the three fastest women in the history of the 100 back, and the only three to break the 58-second barrier. They are three out of the last four world record holders in this event. They were the three women standing on the 100 back podium at the Olympics last year, along with the 200 back podium at the 2019 Worlds. And finally, they look to be the trio to beat once more coming into the 2022 World Championships.

It’s rare that we see three of the fastest performers in history being in peak form at the same time. None of them are showing any signs of slowing down, meaning that the world record could be under threat once more.

In 2019, a 17-year-old Regan Smith was seemingly unbeatable in the backstrokes. After destroying the 200 back world record, she went on to break the 100 back record in a time of 57.57 leading off USA’s 4×100 medley relay to become the first woman under the 58-second barrier.

However, since then, the world has caught up to her. McKeown took down Smith’s world record in 2021 at the Australian Trials, and went on to beat her at the Olympics. Smith finished third in Tokyo with a time of 58.01, which is still super impressive, but bronze wasn’t the color we expected from her when she first broke out.

This year, Smith had a statement swim at the U.S. Trials, winning the event in a U.S. Open Record time of 57.76. It currently stands as the #1 time in the world this year, and the only one sub-58 thus far. And although this was “only” Smith’s third-fastest performance, it was her first time going sub-58 in an individual event final (the rest of her 57-point swims were done either leading off relays or in prelims/semi-finals). This could be an indication that Smith is learning how to handle the pressures of a big race better, and gives off a sign that she’s ready to take her world record back and claim her first world title in the event. 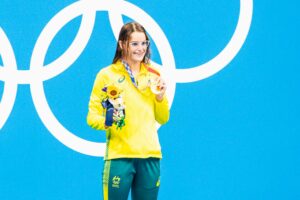 The hunter has become the hunted. After spending the last two years chasing down Smith’s times and records, Kaylee McKeown is now the one on top. She broke Smith’s world record at the Australian Olympic Trials last year in a time of 57.45, and then nearly matched that time in Tokyo when she took gold in 57.47.

McKeown currently holds the second-fastest time in the world this year at 58.31, a time she swam in February. However, at Trials, she was a bit slower in 58.49. Some may point to this as a cause for concern, stating that McKeown is usually faster than this in-season. However, it could be a change of strategy from last year, considering that she added from trials to the Olympics in both of her events and is now ensuring she’s at 100 percent come Worlds.

Point being made, the Aussie is the defending Olympic champion and world record holder, but she’s going to have to fight very hard to retain her spot as the best backstroker in the world.

Masse: Overlooked But A Serious Threat 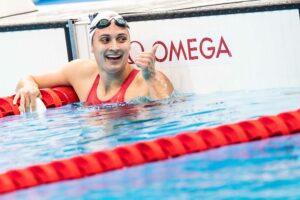 In the swarm of Smith and McKeown’s swims, many seem to have forgotten that Kylie Masse is the defending two-time world champion, and the one who first started this chain of 100 back world records.

Having been on every single 100 back podium at a major international meet since 2016, Masse is one of the most consistent swimmers in the world. In 2017, she broke Gemma Spofforth’s super-suited world record in a time of 58.10 to win the world title. She then defended that crown in 2019, although her swim was largely overshadowed by Smith’s world record at the same meet. Last year, she became the third woman under 58 when she went 57.70 at the Canadian Trials, and then proceeded to go 57.72 to take silver at the Olympics.

Being in the lead for the majority of both her 100 and 200 back races in Tokyo, Masse was run down by McKeown twice in the last 15 meters. If the Canadian can finish strong and hold off her opponents, she could be the one on top in Budapest. Masse holds a season-best of 58.41 from trials this year, which ranks her fourth in the world. However, she’s neared that mark multiple times at the Mare Nostrum stops recently. 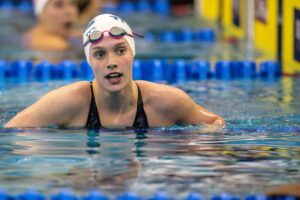 If there’s anyone that can break apart the McKeown-Masse-Smith trio, it’s 17-year-old Claire Curzan, whose best time of 58.39 sits third in the world right now. The American surprised everyone by finishing second behind Smith at U.S. Trials, beating out backstroke specialists such as Olympic fourth-place finisher Rhyan White, despite being better known for her sprint freestyle and butterfly.

The one price that Curzan has to pay for her incredible versatility is the large load that she will have at Worlds. Aside from the 100 back, she’s qualified to swim in the 100 free and 50/100 fly, and will likely be called on to swim three different relays. The 100 back semis fall on the same day as her 100 fly final, although both events are relatively early in the meet (the women’s 100 fly final is Day 2 while the 100 back final is Day 3). It’s just a matter of what events Curzan chooses to prioritize, but given the ability she’s shown in delivering phenomenal performances with a short turnaround, it shouldn’t be a major issue.

Another teenager swimmer with a very heavy schedule is Mollie O’Callaghan, who is qualified to swim in the 100 and 200 free and the 50, 100 and 200 back. In addition, she will probably be expected to swim on multiple relays as well. Last year, O’Callaghan swam a very promising time of 58.87 at trials, but couldn’t swim the 100 back at the Olympics because she was beaten by McKeown and Emily Seebohm. This year, she took advantage of Seebohm’s absence to make the team, although her time of 59.12 didn’t showcase her full potential due to the fact that she had just swam the 200 free minutes beforehand. 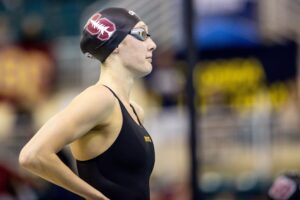 O’Callaghan will have to deal with this 100 back/200 free double again at Worlds, with the 200 free semis coming after the 100 back final.

Canadian swimmer Taylor Ruck showed flashes of her 2018 self when she won the 200 free at the NCAA Championships this year. She later went on to swim really well at the Canadian World Trials, finishing second in the 100 back with a time of 59.67. At the Olympics, she missed the final by 0.15 seconds, but with her upward trajectory this season and many notable Olympic finalists absent, Budapest could be Ruck’s chance to make the final and get close to her lifetime best of 58.55.

Many strong contenders from Tokyo will be absent, such as fifth-place finisher Seebohm and sixth-place finisher Kathleen Dawson. Seebohm didn’t compete at Australian Trials, while European Record holder Dawson is reportedly skipping Worlds, according to journalist Mark Woods.

Not To Be Ignored 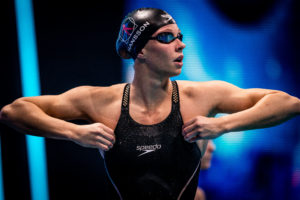 Another swimmer better known for her butterfly, Louise Hansson was a DNF in the 100 back at the Olympics. Later on in December last year, the Swede pulled off a shocker win to take the 100 back at Short Course Worlds, beating out stars like Masse and Toussaint. She first broke a minute in long course this year, with her best time being a 59.83 from the Stockholm Open.

Then there’s Kira Toussaint, who recently moved from the Netherlands to train at her alma mater, the University of Tennessee. She’s the European Record holder and short course world champion in the 50 back, but she’s had plenty of success in long course as well, which was put on display when she finished seventh in the 100 back final in Tokyo. She went 59.11 in that race, although her best time of 58.65 was from an Olympic qualifying meet in Eindhoven last April. Her season-best is 59.95, and a change of scenery could be just enough for Toussaint to make a move toward the top.

At Short Course Worlds last December, Toussaint didn’t perform to expectation, missing the podium in the 100 back and being out of the final entirety in the 50 back. However, a change of scenery could be just enough for Toussaint to make a move towards the top.

Toussaint’s teammate, Maaike De Waard, actually won the 100 back at the Dutch Trials this year in a time of 59.87 to beat her countrymate. It was a near best time for her, being just over a tenth off the 59.76 she went at Europeans last year. It was also a major improvement from her 16th-plsce finish from the Olympics, where she swam a time of 1:00.49.

The first Israeli swimmer to reach an Olympic final, Anastasia Gorbenko finished eighth at the Olympics in this event and set a best time of 59.30 in the semis. She’s been seeing major improvements in both long course and short course, so look to see her mix into the final as well.

Welsh swimmer Medi Harris dipped under a minute for the first time at the ​​British Universities and Colleges Championships (BUCS) this March, swimming a time of 59.30. She later lowered that mark to 59.24 at the McCullagh International Meet, beating out Dawson and breaking a Welsh record in the process. She’s ranked ninth in the world this year, and could potentially make her way into a final considering that three of the swimmers ranked above her are Americans who didn’t make the Worlds team.

Dark Horse(s) – Emma Terebo and Mary-Ambre Moluh, France: These two women are on a steep rise, having broken a minute for the first time at French Championships this year. Moluh is just sixteen years old, finishing second at French Championships in 59.67 to become the youngest Frenchwoman under a minute. She was only beaten by Terebo, won the race in 59.64. Both swimmers are closely approaching Laure Manadou’s French record of 59.50.