Alas, we’ve come to the last stop on the ride: it’s the final night of pool swimming at the 2022 FINA World Championships.

The men’s 50 back gets us started. Hunter Armstrong and Justin Ress both broke 24 seconds at U.S. Trials, with Armstrong smashing the world record with a 23.71. In the semis, they proved again that they’re the men to beat, as they qualified for the final as first and second seeds; Ress swam 24.14 to get his hand on the wall ahead of Armstrong’s 24.16. They lead the field by .23 seconds.

Lurking in fourth and looking to earn another medal is Thomas Ceccon. He set a new world record in the 100 back (51.60) and broke, then re-broke the Italian record in this event in heats and semis. He’s been on fire in Budapest this week, so don’t count him out here.

Also looking to get in on the action is Greece’s Apostolos Christou and Poland’s Ksawery Masiuk. Both have set national records in the 50 and 100 back in Budapest and are having great meets. Barring disaster, the Americans look like they’ve all but locked up gold and silver, but there should be a real battle for bronze.

100 breast world champion Benedetta Pilato leads the way here in 29.83. This is her signature event: she holds the world record in 29.30 and won silver in 2019 at just 14-years-old. She’s the one to beat here, as she aims to sweep the breaststroke sprints in Budapest.

The only other swimmer under 29 seconds in the semis was Ruta Meilutyte, who’s done well in her first major international competition since returning to the sport, picking up a bronze in the 100 breast. Based on her performance in the 100, the former world record holder is clearly still capable of mixing it up with the best, and will be back in the medal hunt here.

Lilly King is the two-time defending champion, but snuck into this final in eighth. That’s exactly what she did in the 100 breast, and she went on to place fourth in that final. She also won the 200 breast earlier in the meet, so it’s a bit hard to know what to make of her form right now. She’s seemed to get stronger as the meet’s gone on, so don’t be surprised if she’s in on the action.

It looks like we’re set for a rematch of the 800 free, as the three medalists, Florian Wellbrock, Mykhailo Romanchuk, and Bobby Finke, are the top three qualifiers for the final. After successfully blasting past the field for the win on the last 50 in the 800, it’s fair to expect Finke to stick with his winning strategy.

There are two major questions about how the race will look tonight. First, knowing Finke’s strategy, how far ahead will Wellbrock, Romanchuk, or another medal hopeful like Guilherme Costa need to be in front of Finke heading into the home stretch if they don’t want to get caught? Second, after Tokyo, Finke talked about how much he benefitted from being in one of the outside lanes, as he was able to mark all his competitors at once. That won’t be the case tonight, as Finke will be in lane three. This doesn’t seem like it should affect him too much, given how strong he was in the 800, but it is something to keep in mind.

In a race that’s missing the usual big stars and medal contenders, veteran Sarah Sjostrom was the clear favorite in this event heading into the meet. She’s still in a strong position to reclaim the top step of the podium (she won gold in 2017 and silver in 2019) after a 24.15 in the semis after winning the 50 fly minutes earlier.

However, Kasia Wasick has asserted herself as a huge threat to upset Sjostrom. She won her semi with 24.11, claiming the top seed overall for the final. That’s a lifetime best and new Polish record for Wasick, who has been having a great year. She’s the first Polish woman to make the 50 free final, so if she medals, it will be a first for her country in this event.

After chopping more than a tenth off her best to touch in 24.39, Australia’s Meg Harris has inserted herself into the medal conversation. Also keep an eye on Torri Huske, who’s broken 2 American records and won 2 individual medals. Like Sjostrom, she also had the 50 fly/50 free double, except she had less time as she was in the first semi. She qualified in only the 7th spot but without that double, she could certainly sneak in for another medal.

We got a preview of what the final could look like in heat 2, with teen stars Summer McIntosh and Katie Grimes going head to head. They were both out quickly on the fly leg, and while McIntosh was able to pull away a bit on breaststroke, Grimes used her distance skills to claw back to McIntosh on freestyle. McIntosh ended up touching first, 4:36.15 to 4:36.68, but it should be another close race tonight.

Olympic gold and silver medalists Yui Ohashi and Emma Weyant will try to get in on the action in the final. This is Weyant’s first (and only) event of the meet, but Ohashi had a rough outing in the 200 IM, failing to make the final in an event she won in Tokyo. In prelims, Katinka Hosszu edged out Ohashi. She looked in control throughout the entire race, a great sign for her as she also hasn’t been having the best Worlds. 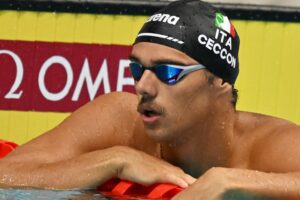 The U.S. posted the top time of the morning in 3:32.91, cementing their status as the favorites for the final. France was just behind in 3:32.98, but don’t expect it to necessarily stay that way. Leon Marchand will likely have more to give on his fly leg, but even without Caeleb Dressel, the U.S still has some big substitutions to make, including Ryan Murphy and Michael Andrew. The U.S has a big decision to make with their lineup without Dressel, and while their depth does give them an edge over the field, they can’t afford to mess up too much.

That’s because without Dressel, the Italian team just got very interesting as a pick to upset the U.S for gold. They boast a killer first two legs in Thomas Ceccon and Nicolo Martinenghi, who won the 100 back and 100 breast earlier in the meet (Ceccon in world record time). They looked relaxed this morning, clocking 3:33.02 for third, but they’ll be ready to push the U.S. in the final.

In our preview of this race, we wrote that the battle for gold would be between Australia and the U.S. That’s likely still true, but the teams could not have looked more different in the heats. Australia posted the fastest time in 3:56.77, with room to drop as Kaylee McKeown will almost certainly be faster and Mollie O’Callaghan will make her way onto the squad.

Meanwhile the U.S. went with a bold relay lineup and almost paid for it, squeaking into the final in 7th with a time of 4:00.06. They’ll likely exchange all four legs so they should be a lot faster tonight, but it will certainly be odd to see them on the outside in lane 1 rather than in the middle of the pool. In Tokyo, the U.S. men won gold in this relay from an outside lane, so now in Budapest the women will try to follow suit.

The Netherlands and Sweden both swam great races this morning, though as they already used their big stars in the morning, it’s unclear how much time they’ll be able to drop. Canada does have substitutions to make, which will help them secure a spot on the podium again after their bronze medal performance in Tokyo.