In 2010, Nathan Adrian very nearly became the first man to go under 19 seconds (18.99 or better) in the fall semester of the NCAA. At the 2010 Winter Nationals, a meet that was at the time in short course yards and attracted lots of college teams, he swam 19.00 to win the 50 free final on December 2.

It would take another five years before then-sophomore Caeleb Dressel would go 18.77 at the 2015 Ohio State Invitational. That would kick off his run at doing a whole lot of things that nobody had ever done before, culminating with his career-ending 17.63.

But Dressel’s swim would not exactly open a floodgate. For seven straight seasons, a single swimmer would go 18 seconds in the event mid-season, but none more. It was Dressel in 2015, 2016, and 2017. Texas’ Tate Jackson did it in 2018. Ryan Hoffer of Cal did it in 2019 and 2020, and Texas 5th-year Cameron Auchinachie did it last season.

This year, though, the tide turned, with a whopping seven sub-19 swims in the 50-yard free in the fall semester. That’s almost as many as did it in all other years combined.

It’s not exactly a surprise given what happened at last year’s NCAA Championship meet. 12 swimmers swam 18-second 50 frees in either prelims or finals (or both) of the individual 50 free event. But it is stunning to see what was previously an outlier sort of thing become the norm at the flip-of-a-switch.

Being sub-19 in the 50 free has, generally, been a harbinger of future success, with two pretty notable successes. In 4 of the 7 seasons where it previously happened, the guy who did so mid-season went on to win the NCAA title: Dressel three times and Hoffer once. In Hoffer’s other 18-second midseason year, the NCAA Championship meet was canceled by COVID-19.

Tate Jackson finished 7th at the 2019 NCAA Championships (he was 18.95 in prelims but slipped to 19.03 in finals). Cameron Auchinachie was 18.63 in prelims, but was disqualified in the A-Final last year.

Among the swimmers who did it this season? The defending NCAA Champion Brooks Curry and last year’s fastest 50 yard freestyler Bjorn Seeliger (he did it on a relay leadoff).

So why is this tipping point happening now? This is a big topic of ongoing conversation, but here are a few hypotheses:

The “Dressel effect” – It’s been about 8 years since Caeleb Dressel began to become the most exciting college swimmer we’ve ever seen. That means that this crop of swimmers were somewhere between ages 11 and 14 when Dressel started doing his thing. That probably brought about a couple of shifts, especially for the Americans on the list. One is that the sprint events became premier again as the page turned on Michael Phelps and the IMs. Another is that maybe we saw this generation of swimmers more likely to make that choice to stay in swimming among a field of options.
Shifts in training – There has been a general shift toward more sprint-based training (both in the pool and in the weight room).
Shifts in philosophy – More and more coaches, especially college coaches, are okay with their athletes just being sprinters. The days of “everyone needs to be able to swim a 200 free” are slipping further in the rearview. David Curtiss is a perfect example of this. He was the ACC Champion in the 50 free last season, but his scoring output was the lowest among NC State swimmers at that meet – because of his relative weakness in other events.
Reintroduction of great international sprinters – four of the seven guys who have been sub-19 this fall are from outside of the US – Liendo from Canada, Seeliger from Sweden, Caribe from Brazil, and Crooks from the Cayman Islands. Top international swimmers coming to the NCAA isn’t exactly a new phenomenon, but it goes in cycles. When we see those cycles up, we see ‘new things.’ For example, from 2005-2009, we saw a lot of the top international sprinters come to the US – Cesar Cielo, Fred Bousquet, Matt Targett – and in 2005, Bousquet became the first man under 19 seconds in the 50 free at any meet (18.74 at NCAAs).
Changing motivation factors – With the way swimming is going, it’s looking more and more like it could take 18.4, or better, to win at NCAAs in March. If you’re not going 18.9 mid-season, it becomes much harder to go 18.4 at NCAAs. Last year, Drew Kibler was 19.19 mid-season and 18.60 at NCAAs (in prelims). That’s the only real example of someone dropping that kind of time to get involved in the title competition. 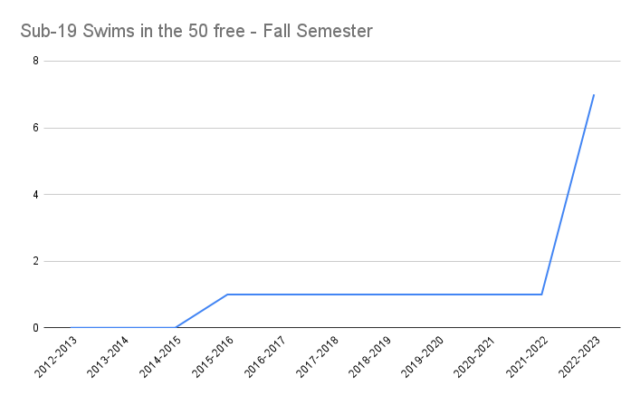 Less Is More: Over-Trained and Under-Rested