It’s that time of the year again. SwimSwam will be previewing the top 12 men’s and women’s teams (and then some) from the 2022 NCAA Championships. Follow along with the College Swimming Preview Channel. Want to read even more? Check out the latest edition of the SwimSwam magazine.

Three years ago, we unveiled a new, more data-based grading criteria based on ‘projected returning points’, a stat of our own making that involved a lot of manual calculations involving departing seniors, redshirts, freshmen, etc. We liked the objectiveness of that stat, but given that there’s still a lot of uncertainty for this year, we’re adopting a hybrid approach this year. The “stars” will rely heavily on what swimmers actually did last year, but we’ll also give credit to returning swimmers or freshmen who have times that would have scored last year.

Since we only profile the top 12 teams in this format, our grades are designed with that range in mind. In the grand scheme of college swimming and compared to all other college programs, top 12 NCAA programs would pretty much all grade well across the board. But in the interest of making these previews informative, our grading scale is tough – designed to show the tiers between the good stroke groups, the great ones, and the 2015 Texas fly group types.

We’ll grade each event discipline: sprint free (which we define to include all the relay-distance freestyle events, so 50, 100 and 200), distance free, IM, breaststroke, backstroke, butterfly and diving. Use these grades as a jumping-off point for discussion, rather than a reason to be angry.

After a bit of a sub-par 2020-2021, the NC State came roaring back with at both the conference and national level.

Presumably motivated by a narrow loss to Louisville that ended their ACC title streak, NC State came out swinging. They won five individual events, including all freestyle events except for the 100, and three out of the five relays. But it was the depth that really came through, enabling the Wolfpack to win the conference title by over 300 points.

Those ACC performances translated into NC State qualifying the maximum number of NCAA slot, bringing 17 swimmers and 1 diver to the Championships.

That depth helped the Wolfpack improve from 8th to 4th, where they’ve finished most of the last decade. Nyls Kortanje led team the team with 29 points from the 50 free and the 100 fly, Kacper Stokowski earned a national title in the 100 back, and Ross Dant made the A-final in both the 500 and 1650 freestyles.

Dant led a small distance group that actually outscored the Wolfpack sprinter freestylers in individual scoring. That distance group included transfer Will Gallant, who made an immediate splash with a 2nd-place finish in the 1650, behind only Bobby Finke and just ahead of Dant.

The relays were on fire too, with all five relays finishing between 3rd and 6th. At the end of the week, NC State had earned 291 points, finishing a comfortable 26 points ahead of Indiana.

How loaded is this group? Well, the Wolfpack had ten different men race at least one individual sprint freestyle event at NCAAs, and all ten return. The scary thing is that this group arguably left some points on the table, based on best times.

We’ll start with the grizzled veteran of the group, Dutch Olympian Nyls Korstanje. He clocked a 50 free lifetime best of 18.66 with a 5th pace finish at NCAAs, and then finished 20th in prelims in the 100 free with a 42.18. His lifetime best of 41.91 in that event comes back from 2019 NCAA prelims, when he made the B-final final as a freshman. Matching that time in this year’s prelims would’ve just barely earned him another B-final swim.

We’re three names in, and only one of them, Korstanje, actually swam on a NCAA freestyle relay last year.

Rising senior Noah Henderson continue to come up big last year, hitting a 50 free best time of 18.80 to finish 10th overall at NCAAs. He also hit a best time in the 100 free, with a 42.15 in prelims to finish 19th. With at least five guys ahead of him not returning this season, he looks like a strong bet to move to scoring there. Not only that, but Henderson was a key part of the Wolfpack relays, leading off the 4th place 200 free in 19.09 and then anchoring the 5th-place 400 free in 42.05.

Besides the aforementioned ten, backstroker Kacper Stokowski added a 18.66 split on the 200 free relay, despite not swimming any individual freestyle events.

If we were awarding stars based strictly on last year’s NCAAs, this would be a three-star group. But the Wolfpack is so talent-laden that it wouldn’t take much to break right and score 45 points — and possibly much more — across the sprint freestyle races. Ok, moving on, and we promise the rest of the sections will be shorter.

While we won’t spend as much digital ink on the distance group, since the talent is more concentrated, we’ll mention again that they actually hauled in more individual points at NCAAs last year than the sprint group did.

There was a lot of hype in the comments section last year about Indiana transfer Will Gallant, and for once, the hype was justified, as Gallant actually was the 1650 runner-up at NCAAs, touching just ahead of Dant at 14:31.34. Gallant was part of that Wolfpack sweep in the 500 at ACCs, and his time from there of 4:12.99 would’ve put him in the B-final at NCAAs had he matched that time in prelims.

James Plage added to the Wolfpack point total with a 14th place showing in the 500 free, and he finished just outside of scoring range in the 1650 with a 17th place time of 14:54.01. Meanwhile, Owen Lloyd actually qualified for NCAAs with a 14:50.85, a time which was fast enough to score, but scratched out of the meet. 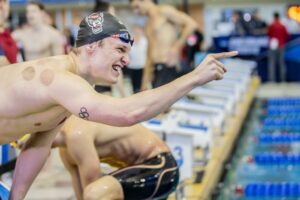 There were plenty of Wolfpack men swimming backstroke at NCAAs, although most of them opted to swim either the 100 or the 200.

The Wolfpack’s leading ACC scorer, Hunter Tapp, added NCAA points with an 11th place finish in the 200, touching just behind Stokowski at 1:39.30.

Sprinter-turned-IMer Giovanni Izzo swam the 100 back at NCAAs, and he clocked a lifetime best of 45.58 to finish 23rd in prelims.

Freshman Quintin McCarty has already been in 46.55 in the 100, while JT Ewing arrives in Raleigh with bests of 47.72/1:41.85. That latter time is less than a second away of what it took to earn a NCAA invite last year.

While it initially looked like Polish national and NCAA qualifier Rafal Kusto was going to return for a fifth year, he doesn’t currently appear on the roster.

Hayes was the only member of the Wolfpack to make finals in both distances, but Nyls Korstanje actually swam on the NC State medley relays. He threw down some gnarly 19.55/43.88 splits, and also took 4th in the individual 100, touching in 44.17.

Rising senior Noah Bowers is a scoring threat after going 1:41.91 at ACCs, then finishing 18th in prelims at NCAAs in 1:42.00. Luke Miller was actually even faster than Bowers with his 1:41.40 to win the B-final at ACCs, but he opted to swim the 100 free at NCAAs.

Mikey Moore has taken the mantle as the Wolfpack’s primary two-distance IMer. He owns lifetime bests of 1:43.13/3:42.89. Neither time is within NCAA scoring range, but they’re close enough (that 200 IM time put him 22nd in prelims) that it wouldn’t take an unreasonable amount of improvement to pull in some points.

As we said, Giovanni Izzo jumped in the 200 IM last year after primarily focusing on the 50 free and he finished 33rd in prelims after hitting 1:42.97 at ACCs.

NC State is slowly moving in the right direction in this discipline. Rising senior Bayne Bennett qualified for NCAAs last year, and finished 25th in the 1m and 33rd in the 3m.

Patrick O’Brien also made a couple of finals at the Zone B Championships, so he stands a chance of making NCAAs this year, and the Wolfpack adds freshmen Spencer Bloom, Renato Caleraro, and Ezra Dykema, any of whom could develop into NCAA qualifiers down the road. 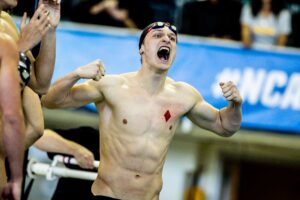 NC State was one of three schools to have all five relays finish no lower than 6th at last year’s NCAAs, and they could be even better this year.

They don’t lose a single leg from the free relays, and they could arguably be even better this year.

There’s not much to say about the 400 and 800 free relays, except that, again, they each return all four legs, and shouldn’t have any problem finishing 6th and 5th, respectively, again.

The medley relays get a little more interesting. Stokowski should be locked in on back, and Korstanje will most likely swim fly again (although Hayes could change that). Assuming Kusto does not come back, Hunter seems like the chief candidate to take over breastroke duties, and his past times indicate that there should be no drop off. If Hunter can’t match his times from a few years, however, watch for Bustos.

Last year, Curtiss anchored the 200 medley relay in essentially the same time as his flat start 50 free. If he can find that half a second or so that he should be able to, this could be a 1:21-low relay and could challenge for the NCAA title.

They’re just a bit weaker in the 400 medley relay, especially as they don’t have a lock-down anchor leg if Korstanje swims free. Still, they should be right around 5th place like they were last year. And if McCarty develops quickly, he could very well end up as that 41-low anchor leg this relay needs.

Bottom line: this feels like yet another 4th place team. The three teams which finished ahead of them at NCAAs all lost significant scorers, but they’ve either reloaded well or have enough of a cushion that it’s tough to see a path for NC State to make up the difference. While this is an incredibly deep team in terms of NCAA qualifiers and relay swimmers, what the Wolfpack really needs is a few stars capable of making three A-finals (e.g., Ryan Held, Coleman Stewart, Andreas Vazaois) and bringing in a slew of points.

Having said that, it feels like the Wolfpack left some points on the table last season. This is especially true, ironically enough, in the sprint freestyles, where Miller was the only man to score in more than one event. They definitely need to score some points in the 100 freestyle, whether that comes via Korstanje, or one of the younger guys further developing.

Distance freestyle should continue to be an asset, and may even be stronger this year. It’s tough to see much of a path to more than a handful of points in the breaststroke and IM, while back looks strong, and the fly discipline could bring even more points as Hayes develops even more after a great freshman season.

Finally, the relays should hold their own, and that 200 free relay could do something special.

So, it feels like like there’s potential for maybe another 50 points here, especially if this incredibly talented freshman class contributes immediately. While another 50 points could hold off the likes of Indiana and Arizona State in the battle for 4th, it’s probably not enough to finally crack the top three, unless one of them slip badly.