As the original Olympic medal, this medal earns the nod based on its historical significance. The front side of the medal features an image of Zeus holding the goddess Nike on the front and the Acropolis on the reverse side. Notably, this medal does not feature the Olympic Rings. 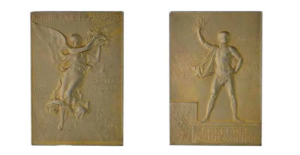 The only Summer Olympic medal to be square instead of round featured Nike and Paris on the front side, with an athlete in front of the Acropolis in the background. The creation of this medal was one of the primary influences in the IOC’s decision to establish the guidelines for Olympic medal shape, making all other Summer Olympic medals have to be round. 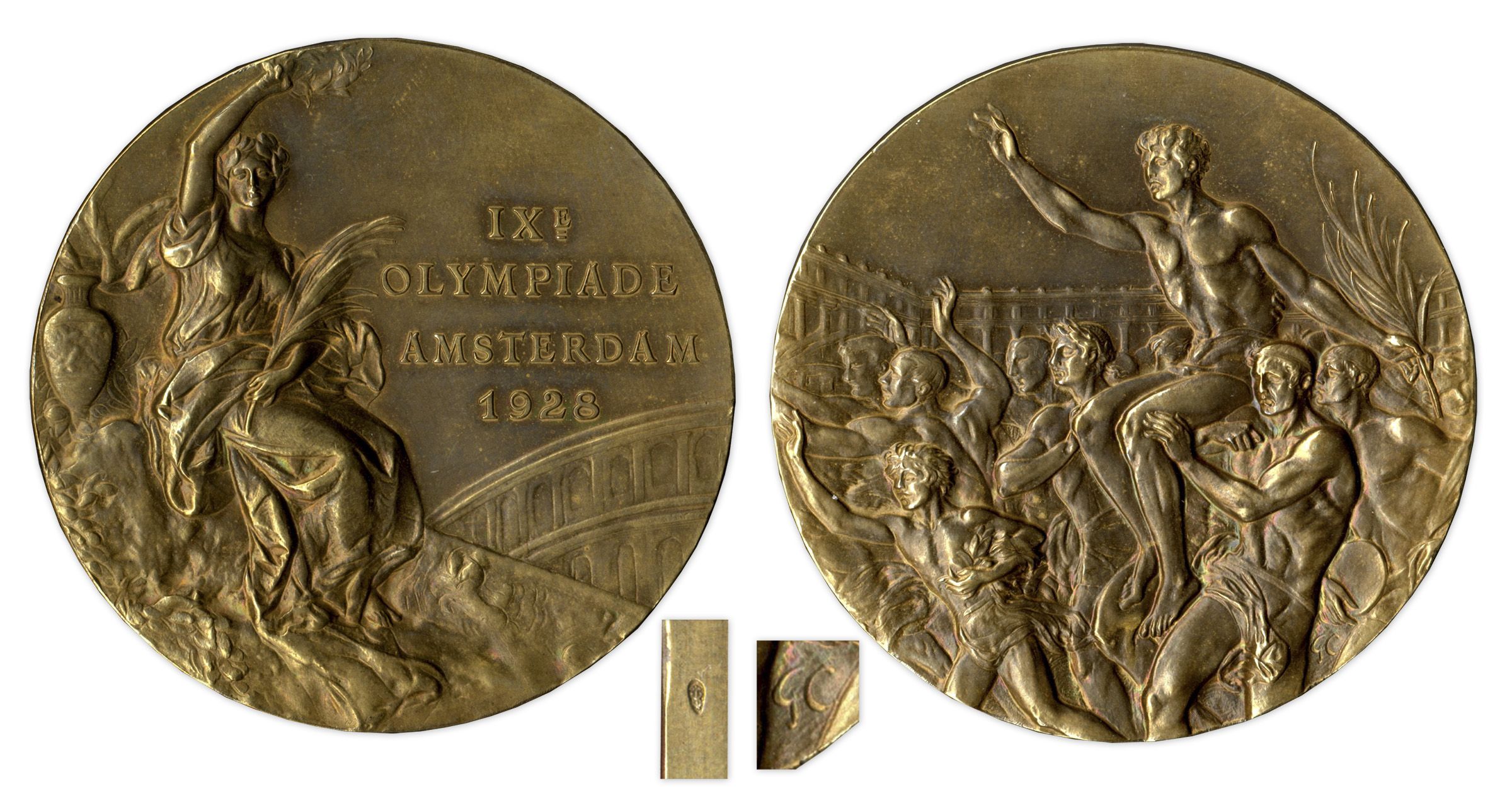 Another historically significant medal, this was the first medal to feature the iconic Trionfo design. Created by Giuseppe Cassioli for a contest the International Olympic Committee held, the Trionfo design features Nike on the front side of the medal as she holds a winner’s crown and a palm leaf in front of the Colosseum. The backside of Cassioloi’s design featured a victorious athlete being carried by a crowd, a design that would be kept through the 1972 Olympic Games. 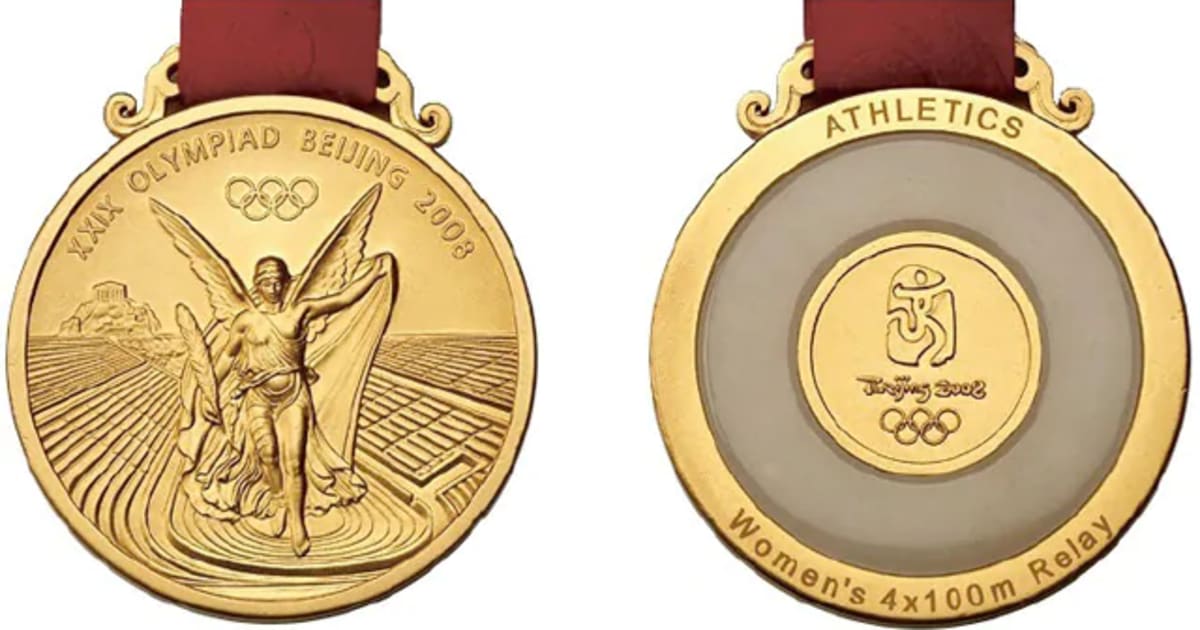 The medals for the 2008 Olympic Games in Beijing were the only Summer Olympic medals to ever incorporate an additional material in the medals, with the planning committee including a ring of Jade inside of it. Visible on the backside of the medals, the color of Jade that was used in each medal differed depending on its color, gold medals had white jade, silver medals included light green jade, and the bronze medals featured a dark green jade. For the people of China, Jade stands as a symbol of honor and virtue, making its inclusion in the medals even more important. As swimmers, we may have some bias, as 2008 was also the year that Michael Phelps claimed a historical 8 gold medals in one Olympic Games. 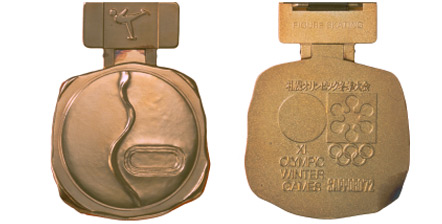 Unlike Summer Olympic medals, the IOC does not regulate the shape of Winter Olympic medals, resulting in square medals being created for both the 1972 and 1984 Winter Olympic Games. The first of the two square medals, the design for the 1972 Olympic Games included images of a snowflake, the Sun, and the Olympic rings on its reverse side. The front side was much simpler, showing a scene of snow. Rather than being perfectly square, this medal also included the use of slightly rounded edges, a very distinctive design touch. 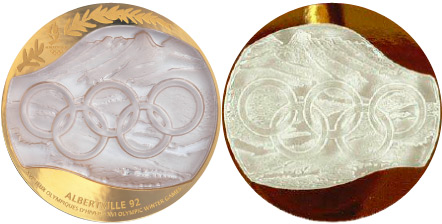 From 1992 through 1998, there were three editions of the Winter Olympic Games that featured medals containing additional materials in them. The 1992 medal was designed using glass, shaped to show the Olympic Rings in front of a mountain range. With a slight white tint in the glass, the medal manages to capture the essence of snow, making it highly symbolic of the spirit of the Winter Olympic Games. 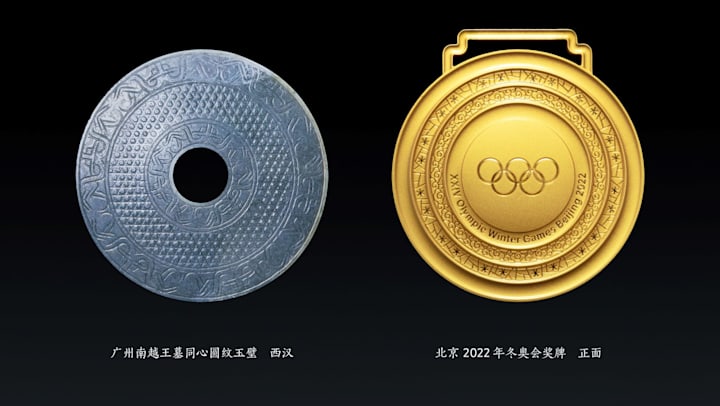 Also getting the nod for creating the top Summer Olympics medal, the city of Beijing, China is the only city to have hosted both the Summer and Winter Olympic Games. For the medals, the planning committee elected to repurpose the design for the 2008 medals, creating a design featuring 5 rings encircling one another, intended to represent the spirit of the Olympic Games. Each medal was also created by using 5 separate layers of rings, bringing that design aspect down to the core of the medal. It is also intended to resemble a Jade pendant, referencing the use of Jade in the 2008 medals. 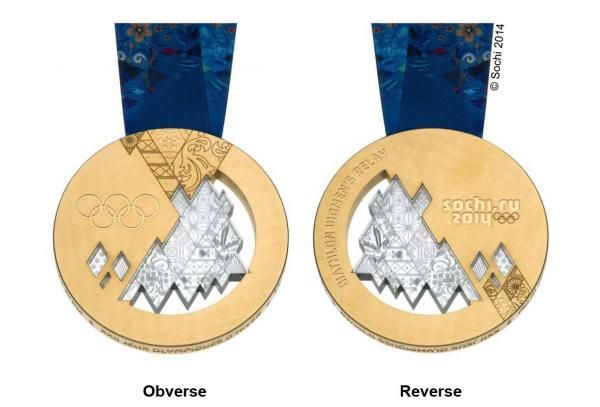 For the Olympic Games in Sochi, Russia, the planning committee and the IOC worked to create a distinctive design that incorporates the use of glass. Unlike most other Olympic medals, the medals for the Sochi Games were not solid, with a gap present between the glass and the gold edge. According to the IOC, there are several unique aspects that the creators of the medal included in it. Unlike most Olympic medals, the Sochi medal features the Olympic Rings on the reverse side, not the front side. Also, it features the official title of the Games written in Russian, French, and English, a motto that is usually written in English and the native language of the host nation. 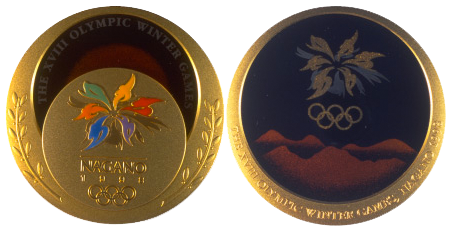 The medal for the 1998 Olympic Games is one of only 2 Olympic medals to ever use color in its design. Utilizing lacquer to create a glass-like effect, the medal showcases an image depicting the  Shinshu mountains on its reverse side. According to the IOC, the imagery was created using the Japanese art form known as Maki-e, performed by local artists, allowing for an important form of the culture to be incorporated within it. With the use of blue, orange, purple, red, green, and yellow, its creators managed to create an extremely unique design that has not been attempted with other editions of the Olympic medal.