This is Part II of a two-part series. Read Part I here.

“I want to age like sea glass. Smoothed by tides, not broken. I want the currents of life to toss me around, shake me up and leave me feeling washed clean. I want my hard edges to soften as the years pass—made not weak but supple. I want to ride the waves, go with the flow, feel the impact of the surging tides rolling in and out.

“When I am thrown against the shore and caught between the rocks and a hard place, I want to rest there until I can find the strength to do what is next. Not stuck—just waiting, pondering, feeling what it feels like to pause. And when I am ready, I will catch a wave and let it carry me along to the next place that I am supposed to be.

“I want to be picked up on occasion by an unsuspected soul and carried along—just for the connection, just for the sake of appreciation and wonder. And with each encounter, new possibilities of collaboration are presented, and new ideas are born.

“I want to age like sea glass so that when people see the old woman I’ll become, they’ll embrace all that I am. They’ll marvel at my exquisite nature, hold me gently in their hands and be awed by my well-earned patina. Neither flashy nor dull, just a perfect luster. And they’ll wonder, if just for a second, what it is exactly I am made of and how I got to this very here and now. And we’ll both feel lucky to be in that perfectly right place at that profoundly right time. I want to age like sea glass. I want to enjoy the journey and let my preciousness be, not in spite of the impacts of life, but because of them.”

Recently, I attended the United States Masters Swimming Nationals and I was inspired and impressed with the women’s racing. I had just read a research study which stated that after the age of 50, women age three times faster than men.

But the women at this meet were amazing. Last week I interviewed Tracy Grilli, age 65, and this week I took five (questions) with Charlotte Sanddal, age 99.

After the United States Masters Nationals in San Antonio, Texas, Charlotte went to the National Senior Games in Fort Lauderdale, Florida. There she was interviewed by Bryant Gumbel and Mary Cabrillo on Real Sports, which will be available on HBO and Hulu. Charlotte is one busy lady.

These are the reasons swimming helps you age like sea glass, according to author Jeff Hayward:

Q: What is your background and personal history?

A: I grew up in Chicago and was what you would call a ‘Tomboy.’ There were no sports for women and I had so much energy that in today’s world they would have probably medicated me. I became an Aviation Machinist Mate from 1942-1945 thru the Navy, because I didn’t know shorthand and I didn’t want to wear a dress and sit at a desk but I  wanted to help the war effort and I got to learn something new. (Think of Rosie the Riveter – a poster by J. Howard Miller – which represented the women in factories and shipyards producing war supplies.)

After the Navy, I went to college and got a Masters degree in social work and worked for the State of Montana in nursing homes. It was very necessary and very rewarding work. I retired at age 72 and started swimming.

Q: How do you stay motivated and not let life get in the way?

A: Swimming is generally my focus, it gets me up in the morning and gives me something constructive to do with my life.

Q: What are your workouts like? How often do you swim? What is your favorite set? Do you get nervous before races? 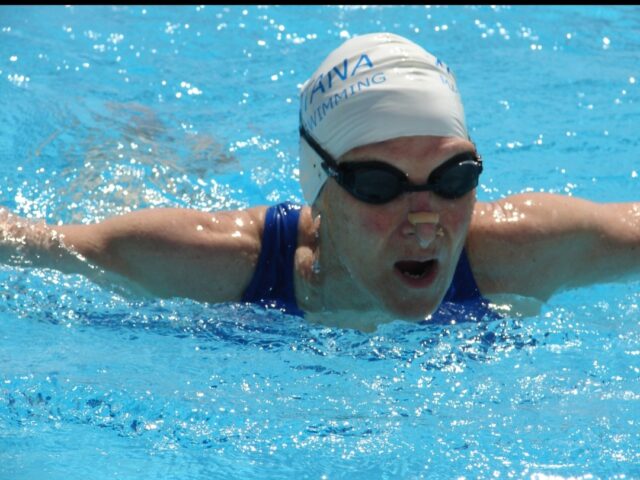 Q: Your coaches say you are “simply amazing.” What do you have to say about them?

A: Peggy Stringer and Paul Landes are my wonderful coaches. They inspire and encourage me to do the level of swimming that I am capable of doing and to just show up and keep going. I could not do it without them. 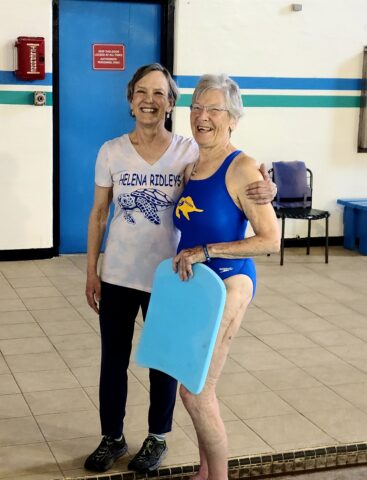 Peggy said when you would room together in your 90’s you would start the day with pushups How many would you do? “10”, Charlotte responds with the best laugh ever. Peggy also stated that your daughter had you get rid of your stick shift car last year and go to an automatic car.  Yes, Charlotte responded, “I miss that car”. Charlotte drives to Boulder Montana from Helena 2 days a week to lift weights with her daughter. (31 miles).

Q: Strength., passion, stretching, nutrition, humor…what lifelong advice do you have for us youngsters?

A: Find something active that is interesting to you and that you will devote yourself to. Swimming is my thing, it has been my way to stay healthy, active, and be involved with people of all ages. 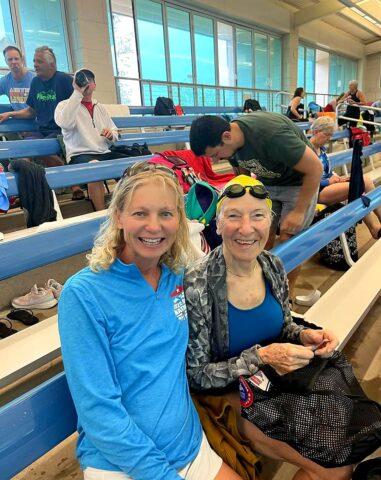 Galileo wrote, “Wine is sunlight held together by water.” I think he was referencing Charlotte Sanddal, who turns 100 this August and you will find her racing at a pool near you.