Water polo is a sport that requires not only individual techniques and conditional abilities (strength, speed and endurance) but also the balance factor. Preparation for balance is essential, both when the player is in possession of the ball and has to pass it to another player to prepare for the shot, and when they have to move easily without possession of the ball to make tackles, markings, or saves.

The key factor of balance is the movement of the legs underwater combined with the individual techniques. It is, therefore, necessary to investigate the type of swimming kick the water polo player must do in the water. In this article, we won’t be analyzing the goalkeeper’s kicks as they require a deeper study.

Before starting to describe how many and which type of kicks can be used in the water, I would like to highlight that the water polo player’s body can be seen most of the time in a diagonal or horizontal position while swimming; the body is rarely in a vertical position or in a sitting-type position as otherwise, it would slow down the execution of any rapid movement that water polo actually requires. If the body is in a horizontal position and closer to the surface of the water, it will have less endurance and more speed in the movements of the restart, sliding or pass-shooting.

There are six important kicks for water polo, two coming from swimming, style kick and breaststroke, while four are specific for water polo such as eggbeater, reverse L kick, over kick and trudgen kick.

The freestyle kick is the most common for all swimmers and water polo players, it allows you to have a front push, make sprints and prevent the opponent from grabbing your legs. It is the most used kick within training sessions as it is very useful for counter-escape actions where maximum speed is required to finalize the action.

The breaststroke kick is the second most important kick in swimming; it allows you to slide to be able to make a pass, attack your opponent or perform small actions in very confined spaces. It is worth mentioning that there are two types of breaststroke kick: the classic one to slide long and keep the body high with a kick of the legs, and then there is the half kick, which is much shorter and faster than the traditional one, making the body move in multiple directions.

E.g. The player presses the opponent with the ball by doing half breaststroke kicks in order not to lose contact with him; or during the last seconds of the game, the defender presses the player who has the ball and makes half kicks in the space of 2 or 3 meters to prevent him from shooting or to induce him to make a mistake. 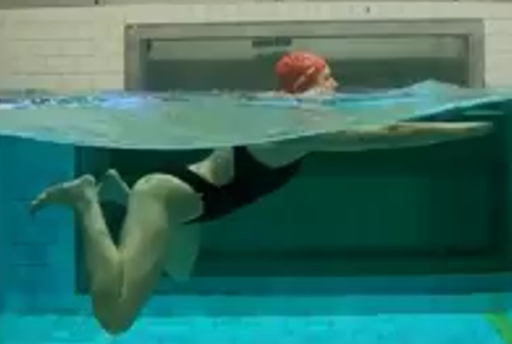 The eggbeater kick is very important to float in the water. The purpose of this kick is to try finding firm points in the water with your feet to be able to support the body and should elevations or lateral movements happen,  to ‘hook’ the water to find more of a boost. This kick allows to move the body forwards and backward and keep the diagonal or horizontal position. It also allows the body to rotate while keeping the back upright.

Although it is the most common kick for water polo, it is one of the kicks where several mistakes are usually made within training, such as:

Knees too wide apart;
feet not ‘taking’ the water properly;
losing the fixed point to support the body in the floating phase;
an eggbeater kick that moves like a breaststroke kick.

These mistakes can be seen by looking at the water polo player from behind. If their back goes up and down in the water, it means that the kick involved is breaststroke and not eggbeater kick, and therefore that the body does not float but goes up and down, making what is essentially a hole in the water. 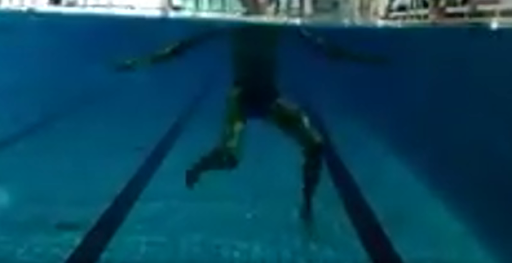 This kick occurs when one arm is out of the water to receive a pass from another player, shoot, get the ball, or be in a waiting situation ready to make a move.

This kick allows you to keep your body balanced where one leg is perpendicular to the axis of the body, keeping it high while the other leg at water level gives balance or manages to give direction to the body, to then be able to start with the trudgen kick (if the right arm is out of the water, it will be the right leg to stay high). 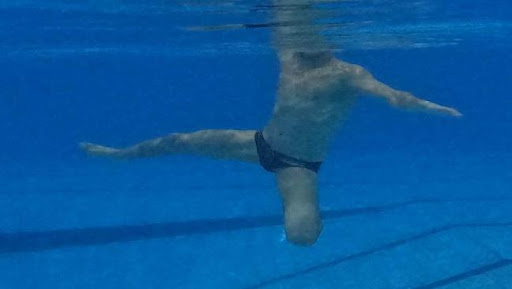 SIDE or OVER KICK:

This type of kick is used to slide, with the feet forward, in a different direction from the body. It is useful for sliding at a short distance and then being ready for another action, for instance with an extra man from pos. 4 we want to slide to pos. 3 and then shoot or pass the ball, or on man down, when the defender is in front of the player holding the ball and moves to slide in the mirror position to prevent the shot. 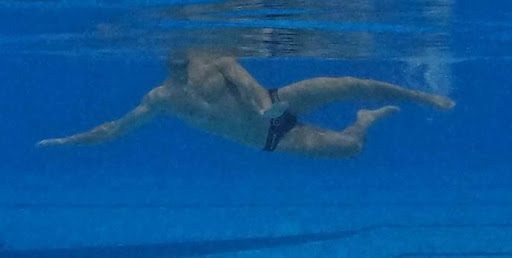 The trudgen kick is very important for restarts and to have the body closer to the water level to be able to reduce endurance. The trudgen kick and the breaststroke kick might look similar but they are not; the main difference involves the position of the legs, which in the first kick is reverse L shape and the leg below is perpendicular to the body. This is necessary to allow one leg to push up while the lateral leg pushes forward. In other words, the trudgen kick allows one to “jump” in the water to press or to intercept a ball.

The feet in this kick should be trained this way if the player is right-footed: the left foot with the instep should push the water down, while the right foot should be in a hammer position and push forward, as it does in backstroke kick. 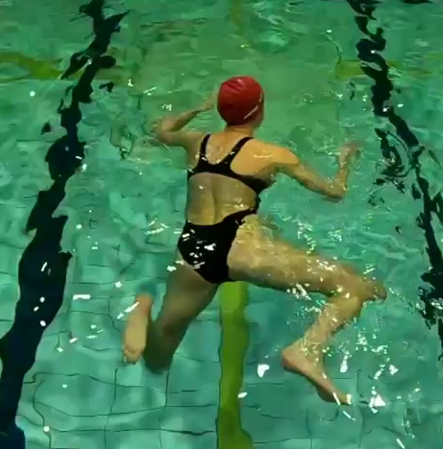