Welcome to The Week That Was In College Swimming, where every week we’ll take a look at some of the highlights from around the NCAA in all three divisions.

It was a packed week, thanks to the first round of midseason invitationals happening. There were plenty of fireworks, including Kate Douglass dropping a 2:01.87 200 breast for new NCAA and American records, Leon Marchand moving to #3 all-time in the 400 IM (3:33.65), and Maggie MacNeil posting the fastest-ever relay splits in the 50 and 100 fly.

On Thursday, when the majority of the invites raced the 50 free, it seemed like every time we turned around someone else had taken over as the fastest in the NCAA. When the dust settled, it was Tennessee sophomore Crooks on top in 18.27, tying Björn Seeliger as the #2 performer in history. Across all the midseason invites, Crooks stood out as one of the weekend’s strongest performers. Not only did he drop sizzling times in his primary sprint freestyle events, he split 40.87 on Tennessee’s nation leading 400 free relay. He also showed off his range by swimming lifetime bests (and Tennessee Invite meet records) in the 100 back and 100 fly.

On the women’s side, we had Gretchen Walsh and Maggie MacNeil–two of the top contenders for the NCAA title in March–both hitting lifetime bests. First, at the Art Adamson Invite, Macneil clocked 21.03, shaving .14 seconds off her previous best and tying Erika Brown as the #4 performer all-time. The next day, Walsh knocked .01 seconds off her best, swimming a blistering 20.94. Along with Douglass, Walsh and MacNeil look like the most likely candidates to win the 50 free in March. Douglass and Walsh have the edge on MacNeil, as they’ve both broken 21 seconds. One of the main advantages that MacNeil had was that unlike the Virginia swimmers, she wouldn’t have to expend energy on relays. However, that’s not the case anymore, as the LSU women notched an NCAA ‘A’ cut in the 200 free relay with a 1:27.63. 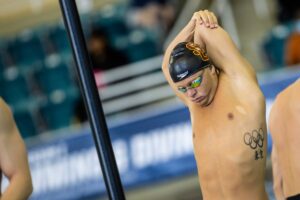 MacNeil wasn’t the only transfer who swam incredibly well for their new team. Victor Johansson, Max McCusker, and Anze Fers Erzen. Johansson joined Alabama this season after initially competing for USC. Racing at the same invite as his old team, Johansson won both the 500 and 1650 free in Alabama school record times. He posted 4:14.34 in the 500 free on the first day of the Art Adamson Invite, then followed that up with 14:39.63 in the 1650. That mile swim is the top time in the nation by a significant margin, as no one else has broken 14:40 yet. It also shatters Alabama’s school record that had been on the books since 2006.

McCusker, who is using his fifth-year of eligibility at ASU after swimming at Florida State, also set a program record at his new school. The Brit earned second in the 100 fly at the NC State Invite in 45.01, breaking the Sun Devils’ record. It’s also a new lifetime best for him, undercutting the 45.74 that he swam at 2022 ACCs.

Coming to Texas A&M by way of the now dropped Iowa program, Anze Fers Erzen, hit an ‘A’ cut in the 400 IM. He swam 3:39.05 in the 400 IM, getting under 3:40 for the first time and taking 2nd in an Aggie 1-2-3-4 finish. His freshman teammate Baylor Nelson (who also swam very well this weekend) might be the big answer to Texas A&M’s fall down the standings, but they’ve also shored up some needed depth. After taking on the IMs and a nasty 200 back/200 fly double, Fers Erzen has shown that he’s capable of helping the Aggies as well. 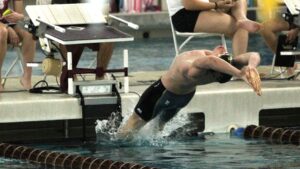 At the Augustana Invitational, the home team’s Bryn Greenwaldt dropped over a second in the 50 free at her first college taper meet, posting 22.50. That would have earned her second at D2 NCAAs, and vaults her immediately into title consideration. She also swam a lifetime best 50.89 in the 100 free, which puts her right on the bubble of making it back to finals.

Sticking to the women’s sprints, Indianapolis’ 200 free relay is already faster than the 1:31.08 they swam to win NCAAs. Last weekend, their team of Johanna Buys, Leticia Vaselli, Julia Magierowska, and Andrea Paaske combined to clock 1:30.86. The most impressive part of the relay was that all four split under 23 seconds, showing off their depth.

We’ve been keeping an eye on Jackson Lustig since he dropped some serious early season speed in the 200 fly, and the McKendree sophomore has just kept rolling. At the Mizzou Invitational, the McKendree sophomore swam five lifetime bests including a 1:42.14 in the 200 fly. That would have put him just outside of finals at 2022 Division I NCAAs, and makes him the one to chase this year in his own division. With his 46.72 100 fly and 1:47.50 200 IM, he’s also putting himself in contention in his second and third events.

Keep An Eye On… 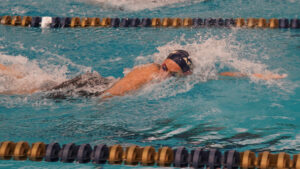 Maddy Gatrall – Heading into the midseason invites, we spent a fair amount of time discussing the swimmers from the top 25 Division I teams who were undefeated in their individual events. We expected a few of them to come out of the weekend with their records still intact, but few had the weekend that Akron’s Gatrall had. At the Magnus Cup, she collected 10 wins (across individual swims and relays). In fact, the only blemish on her record was the 400 medley relay where Akron touched first but was disqualified. The only race where she didn’t swim a lifetime best was the 200 back. It was an impressive display from the junior as Akron dominated the invite, winning with a 666 point margin of victory.

BC Eagles – As an ACC team without scholarships, it’s an uphill battle for the Eagles to move up their conference standings. However, that doesn’t mean they don’t have plenty to be excited about. After an exciting end to the 2022 season, they were in flux without a head coach. Just before the season started, Joe Brinkman was hired, a move which seems to have paid off for the Eagles. They ruled at the Terrier Invite, winning both the men’s and women’s meet and setting 12 school records in the process. Adair Sand led the team with three individual records, posting 49.93 in the 100 free, a 1:47.42 200 free, and a 1:55.96 200 back. She also factored into the 200 medley (1:40.05) and 400 free(3:22.28) relay records.

Reid Mikuta – Auburn has been impressing all season long, and they kept their momentum through the midseason invite, with the women winning the UGA invite and the men finishing second behind Florida. Many of their swimmers hit lifetime bests, but one who particularly stood out was Reid Mikuta, who won the 100 breast in 51.14. That currently stands as the fastest time in the nation, .16 seconds ahead of Caspar Corbeau‘s time from the Texas/Virginia dual. Mikuta, who won the 2022 NCAA ‘B’ final, shaved .18 off his best. 51.14 would have qualified him for the ‘A’ final and eventually ended up sixth. That would be. huge boost for Auburn as they look to continue to climb up the standings.

Hugo Gonzalez confirmed that he’s returning to Cal for the second semester. We’ve been talking about this all season long, but Gonzalez’s presence is a huge factor in the 2023 NCAA team title race. Last season, he scored 41 points at NCAAs, and his IM prowess could be what swings the meet firmly in Cal’s favor.
The fastest 500 free so far this season wasn’t swum at any of the weekend’s invites. Carson Foster fired off a 4:09.43 at a “fast Friday” Texas practice, edging out the 4:09.83 done by Georgia’s Jake Magahey. As a highly versatile swimmer, Foster has always had plenty of options for what his race lineup should look like. On Day 1 of NCAAs, we’d penciled him in to go head-to-head with Marchand, Gonzalez, and Destin Lasco in the 200 IM, but this swim presents an intriguing alternative.

Division I Top Times (Through 11/22, Done In Competition)