Welcome back to The Week That Was In College Swimming, where every week we’ll take a look at some of the highlights from around the NCAA in all three divisions.

Teams are fully in winter training mode now, and on training trips that range from Turkey to Hawaii. There’s been a smattering of dual meets, but otherwise it’s been a relatively quiet week. That gives us the opportunity to look ahead to what we’re looking forward to most for college swimming in 2023. So, maybe this week it’s less of a recap and more of a preview.

To celebrate the new year, the writers here at SwimSwam each gave our wild predictions for 2023. Most focused on the international scene, but there are a couple NCAA-related ones. Putting aside Anne’s tongue-in-cheek prediction that there won’t be repeat champions at Division II NCAAs, we’ve got two predictions to take a closer look at.

Jordan Crooks Goes Undefeated in the 50 Freestyle All Year

Over the first half of the NCAA season, we’ve talked about which NCAA athletes will go undefeated for the season. Riley gave us another narrative to keep track of with his wild prediction that Tennessee sophomore Jordan Crooks will go undefeated in the 50 freestyle in 2023. Since this is the NCAA recap, we’ll stick to discussing this prediction in the confines of the NCAA season. This year, a record seven men have been sub-19 in the event, including Crooks’ teammate Gui Caribe, who could certainly out-touch Crooks at any point this season. With Caribe in the mix as well, we’re set for a barn burner of a race at NCAAs.

(It should also be noted that Riley has been on the Crooks hype train since October, picking him for 50 freestyle champion in our preseason predictions list while the rest of the staff opted for either Josh Liendo or Bjorn Seeliger.

Josh Liendo, Florida – NCAA newcomer Liendo didn’t have much experience in yards before joining the Gators this season, but that hasn’t stopped him from putting up some of the top times in the country. Currently, he sits at #2 in the 50 free behind Crooks with a 18.83. Give him more time to figure out yards, and he should only keep dropping time. Crooks is slated to face off with Liendo twice–at SECs, then at NCAAs. 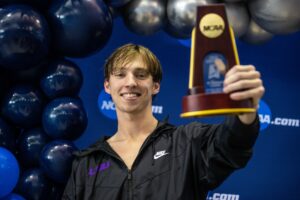 Brooks Curry, LSU – The defending NCAA champion in both the 50 and 100 freestyle will be some serious competition for Crooks. And he’s also in the SEC which means that like Liendo, Crooks will race him twice. Curry’s sitting #6 in the country in 18.94, but not only has he shown he can go faster, but he’s got an uncanny ability to get his hand on the wall first at the big meets.

Bjorn Seeliger, California – Crooks’ nation-leading 18.27 tied him with Seeliger for second-fastest performer all-time. Seeliger posted that time in prelims of NCAAs last year before adding time and finishing second to Curry. He’ll be eager to avoid a repeat of that scenario, meaning that though Crooks will only race him at NCAAs, he’ll be one of the major obstacles to Crooks’ national title. 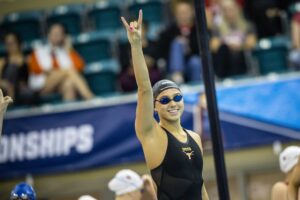 Last season, it was Texas’ diving and fly crew that powered them into second place in the waning events of NCAAs. Incredibly, their fly group has gotten even deeper this year, adding fifth-year Dakota Luther. That means that of the six returning ‘A’ finalists, four will have a Texas cap on this year. Olivia Bray hasn’t raced the event this year (which could signal a shift towards backstroke) but Kelly Pash, Emma Sticklen, and Luther are top 5 in the country. Pash leads the way with a 1:51.96, a lifetime best she swam at the Minnesota Invite.

Based on their positioning in the rankings at midseason, it’s certainly plausible that Anya’s prediction of a Longhorn 1-2-3 becomes a reality. However, like Crooks, the Longhorn women will face tough competition in March. 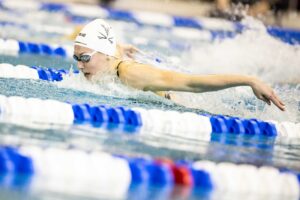 Alex Walsh, Virginia – The eldest Walsh sister is the defending 200 fly champion and likely the biggest threat not only to a Longhorn sweep, but a Longhorn win. Walsh is lurking at #21 this season with her 1:55.63 from a dual meet, but clearly will be faster in the postseason. The biggest question with Walsh though, is if she’ll swim the race. She’s a versatile athlete capable of challenging in a range of events, and could opt for the 200 breast on day 4 if she wants.

Charlotte Hook, Stanford – Stanford freshman Charlotte Hook has made herself known in the NCAA quickly. At the NC State Invitational, she hit a lifetime best 1:52.48. That’s currently the #2 time in the nation and would’ve finished eighth last year. With her replacing Regan Smith‘s 16.5 points, Stanford looks set to mitigate losing Smith in this event.

Lindsay Looney, ASU – We’ve been waiting to see if the Sun Devil women will explode up the Division I rankings the way the men’s team has. It looks like we’ll have to wait a bit longer to see if they can take that step as a team but Lindsay Looney has impressed in the early going this season. At midseason, she was just .17 seconds off her lifetime best 1:53.25. She finished 10th last year, and while it might be a reach to pick her to win, her form so far makes it a possibility for her to break up the Longhorns in March. 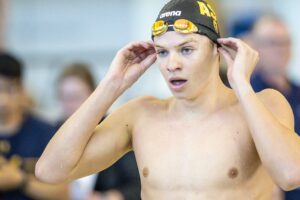 Is it too early to get excited for NCAAs? Now that it’s officially 2023, the answer is no. We’ve been counting the days until the women’s 100 fly battle between Kate Douglass, Maggie MacNeil, Torri Huske, and Claire Curzan since the fall, but that’s not the only race we’re looking forward to. In addition to the two races mentioned above, here are a few other Division I races that we’re anxious to see unfold.

Men’s 400 IM: This was already set to be a thrilling race between Worlds gold and silver medalists Leon Marchand and Carson Foster. With defending champion Hugo Gonzalez returning, it’s only gotten better. Both IMs should be good races, but we opted to highlight this one because of this trio’s star power. Marchand has already dropped a 3:33.65, and Foster excised his demons after NCAAs last year. Gonzalez finally put it all together last year, and he’ll have to work hard to do the same again against these rising stars.

Women’s 50 Free: Will we see another woman join the sub-21 club? MacNeil came close at midseason, posting a lifetime best 21.03. The Virginia duo of American record holder Douglass and Gretchen Walsh (who’s already been 20.94 this season) will be tough to beat, but MacNeil has been swimming lights out this season. It would be something special to see the top three steps of the podium all under 21 seconds at NCAAs. 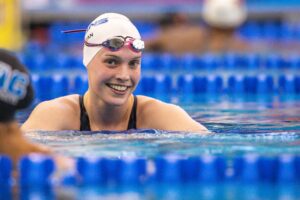 Men’s 200 Free Relay: Staying with the sprints, Auburn’s legendary record could go down this year. Florida came within .03 seconds last year, but the record of 1:14.08 lived to see 2023. Reloading with Liendo, Florida is the obvious pick to be the team to take down the record. However, ASU’s relay of Jack Dolan, Grant House, Marchand, and Max McCusker all split sub-19 at midseason, making them an interesting addition to the mix. They hold the top spot in the nation in 1:15.30. Virginia owns the American record, and Matt King and Matt Brownstead make a powerful relay pair.

Women’s 200 Back: Again, the question is who is going to take advantage of Smith’s early departure from the NCAA? Phoebe Bacon and Rhyan White, having earned berths to the Olympics and Worlds in the last two years are the obvious choices. But there’s also Isabelle Stadden, who’s been swimming well for Cal. The top two this season though, are Curzan and Josephine Fuller, who both swam spectacularly at midseason. Curzan posted a 1:48.50 and leads the field by over a 1.5 seconds–a big gap for the other contenders to close.

Let us know what other NCAA races you’re looking forward to in 2023, or if there are any other athletes you see as potential disruptors for our wild college swimming predictions.

Most Innovative Tech Suit In History Hits The Water – Phenom, By A3 Performance