Welcome to lucky number 13 of the Week That Was In College Swimming. Here, we take a look at some of the highlights around the NCAA in all three divisions. It was an absolutely chaotic weekend, with a flurry of NCAA-leading swims capped off by an NCAA record. We’ll hit as many highlights as we can, but let us know in the comments what swims you were most impressed with this weekend.

Has anybody ever had as good of a weekend as the one Leon Marchand just had? ASU faced off against Stanford in Cal on back-to-back days and it seemed that in each event he swam, Marchand one-upped himself, culminating in breaking the NCAA record in the 400 IM by over a second in 3:31.84. We’ll break down that swim in a moment, but let’s first quickly recap his other top times this weekend:

Marchand’s Top Times of the Weekend

Factoring in his NCAA-leading 1:39.57 200 fly from the NC State Invite, Marchand now owns the fastest NCAA time in five different events. That gives him a lot of options for what to pursue this championship season, though we’ll surely see a lineup that includes both IMs and then likely the 200 breast (which he won last season) or possibly the 200 fly.

Obviously, his NCAA record in the 400 IM was the highlight of his weekend. If you listened to the SwimSwam Breakdown, you know that it’s hard to contextualize this race. We haven’t seen an NCAA record done in a dual meet since Katie Ledecky in 2016.

Watching the visualization gives a new appreciation for Marchand’s freestyle leg. At that point in the race, he was beginning to lap swimmers so you knew that he was going fast. Seeing his record-breaking swim next to Gonzalez’s displays that it was his 50.11 freestyle split that pushed him ahead of Gonzalez’s pace—after the breaststroke leg, he was about half a second behind Gonzalez, 2:41.73 to 2:41.21.

Marchand’s untapered, unshaved times this weekend have opened up a big conversation about how fast the Frenchman will go come championship season. Will he break 3:30 in the 400 IM or 1:48 in the 200 breast?

Marchand wasn’t the only one to set a nation-leading time at a January dual meet—four other swimmers got in on the fun. That includes Marchand’s teammate Grant House, who clocked 1:31.51 during ASU’s dual with Stanford to take over as the fastest in the NCAA this year. 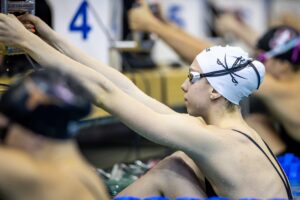 Sophomore Gretchen Walsh has been on fire all year and she kept rolling this weekend: not only did she complete a perfect pre-championship season, she also set the NCAA-leading time in the 100 backstroke at 50.07 while wearing a practice suit. She took over the top time from Claire Curzan, who posted 50.12 at midseason. Walsh also owns the NCAA’s top time in the 50 freestyle this season at 20.94 and is second in the 100 free. With UVA’s dual meet season over, Walsh is perfectly positioned to dominate ACCs and NCAAs.

Keeping it in Virginia, the Hokies’ Youssef Ramadan swam an NCAA-leading 44.76 in VA Tech’s dual versus Penn State. That’s just .03 seconds faster than Jordan Crooks‘ 44.79 from the Tennessee Invite. With Luca Urlando done for the season and Andrei Minakov just getting back to NCAA competition, Ramadan, who was third last year in a lifetime best of 43.90, looks like the current favorite for the NCAA title.

Rounding out the new times on the NCAA leaderboard is Kristen Stege‘s 15:57.01 1650 free from Tennessee’s dual with Carson-Newman. It was her first time swimming the mile this season, as she missed Tennessee’s midseason invite and had opted for the 200 and 500 free at other dual meets (plus the mile isn’t always raced at duals). The time moves the Vol senior ahead of Georgia’s Abby McCulloh by .07 seconds, notable because they will presumably face off at both SECs and NCAAs.

After this weekend all the mid-season additions have swum at least once for their new teams. Time will tell who makes the biggest impact, but Zalan Sarkany made perhaps the best first impression. In his first SCY swim, the Hungarian Sun Devil smashed the program’s 39-year-old 1000 freestyle record. The next day at their dual against Cal, he lowered that record again to 8:50.25. Many were expecting Hubert Kos to be the immediate difference-maker for ASU, but Sarkany showed this weekend that he’s a big boost as well.

Another international transfer who could make a big impact is UVA’s Aimee Canny. The South African missed the first semester finishing school, and arrived in Charlottesville earlier this month. She’s a sprint freestyle specialist and so far has hit 22.95/49.68/1:46.10 in the 50/100/200 free, as well as 2:00.95 in the 200 IM. Her converted times project her to be faster than all those times, so if she figures out yards look for her to add even more depth to the Cavaliers. 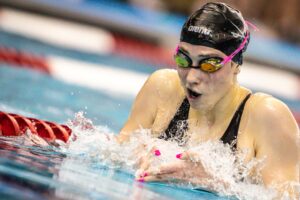 After questions about her status for this season, Emma Weyant has now made her NCAA debut in a Florida cap. Her best swim so far came against Florida State, where she swam 16:08.24. That’s #8 this season but more importantly for her, it’s faster than what she swam last year at NCAAs (16:08.34). It’s a sign that things are working for her in Gainesville, even though we’ve been limited to watching her in long course at the U.S Open. SECs should give us more information.

There were also three season debuts over the last few weeks: Hugo Gonzalez returned for his fifth year at Cal, Andrei Minakov was back competing for Stanford, and Jasmine Rumley returned to the water for the Vols after undergoing a second shoulder surgery. Rumley has only raced the 50 freestyle so far, hitting a season best 23.22 at Tennessee’s meet against Georgia this weekend.

Minakov had a slow start in his season debut against Pacific, but showed improvement in the Cardinal’s meets against ASU and Arizona. He now has season-bests of 19.55 in the 50 free, 43.72 in the 100 free, and 45.07 in the 100 fly. Minakov is a key part of Stanford’s postseason goals, as he scores big points and is a huge contributor to their relays. With their freshmen class not yet having the results we expected, his contributions remain crucial.

Gonzalez’s season debut wasn’t much to write home about, suggesting that he was perhaps out of the water for a bit this fall or is in the middle of a heavy training block. There’s no reason to panic, but he’ll certainly need to make big improvements if he wants to have a chance at defending his 400 IM title against a surging Marchand.

Keep An Eye On… 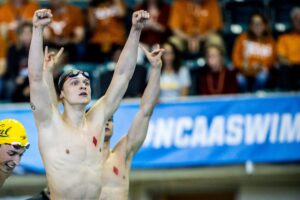 Boston College: If anyone has a case to challenge Marchand for the best weekend in the NCAA, it’s the BC Eagles. At their senior day dual meet against their rival Boston University, they set three school records and 15 pool records. They have an uphill battle in the upcoming Conference Championships as an ACC team with no scholarships, but they picked up momentum last year, and haven’t slowed down under first-year head coach Joe Brinkman. This performance coupled with the 11 school records they set at their midseason invitational show that while they’re unlikely to compete with the top of the ACC anytime soon, they’re certainly on the rise.

NC State: The Wolfpack men in particular had a strong showing at their unsuited meet against UVA and UNC. They hit 1:16.31 in the 200 free relay and 3:07.27 in the 400 medley relay, both of which are faster than they went at the midseason Wolfpack Invite. They backed that up with a 1:24.34 in the 200 medley relay. In the individual events, they showed off their depth, sweeping the top three spots in five events. The meet was a statement that they are over the injury bug and have one of the strongest rosters in the country, further complicating the battle for the top 5 at NCAAs. Don’t forget they’ve got a dual against Texas this coming weekend, which should be a great team battle.