Welcome to The Week That Was In College Swimming, where every week we’ll take a look at some of the highlights from around the NCAA. Many of the NCAA’s stars were in Toronto this past weekend, competing at second leg of the FINA World Cup. Many, including Maggie MacNeil and Kelly Pash, turned heads. That said, there was still plenty of action at NCAA-level meets, and that’s what we’re focusing on here.

Throwing Down the Gauntlet – Kristin Cornish, Johns Hopkins: At a tri-meet with in-state Division I opponents Loyola and Towson, it was Johns Hopkins sophomore Kristin Cornish who shone. She dominated the 1650, clocking 16:29.52 and winning by over 28 seconds. While her best time remains a 16:25 from high school, her swim this weekend was four seconds faster than the time she posted to win the D3 national title. To already be faster than her title time in October is huge for Cornish. She has a seven second gap between her at the second place finisher, but being both faster than her title time in October and posting the division’s fastest mark of the season cements her as the favorite for the 2023 crown.

Howard’s 1-2 Punch – Kali Garcia and Zuzu Nwaeze: In less than 24 hours, two different Howard women took down the program record in the 1000 freestyle, the oldest record on the books.  The previous record, set by Camille Chatoor at 10:56.00, stood untouched for 34 years until freshman Kali Garcia clocked a 10:54.20 in a Friday dual against American University. Then, the very next day, Garcia’s fellow freshman teammate Zuzu Nwaeze hit 10:42.36 in their meet with VMI. Nwaeze’s time shatters Garcia’s mark by nearly 12 seconds. Having two women under this historic record is definitely exciting for the Bison, but what’s even more so is that neither was near her lifetime best. Garcia holds a best of 10:43.49, while Nwaeze’s stands at 10:30.25. Together, these freshmen promise to be a strong 1-2 for Bison distance for the next four years, and the record could trade hands several more times. 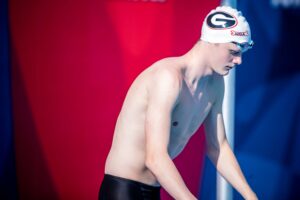 Hometown Victory – Georgia Men Edge Out Florida: In an exciting dual, the #9 Georgia Bulldogs took out the #2 Florida Gators. While Georgia certainly benefitted from Florida’s top recruit Josh Liendo being at the Toronto World Cup and US National Champion Kevin Vargas, they put together a strong performance as a team to take the win, 156-144. 400 free national champion Jake Magahey won his three events, including the 1000 and 200 freestyle which had only the women’s 200 free between them. Luca Urlando put up an in-season best to win the 100 fly (46.19) and also took the 200 fly. The Dawgs also put their backstroke skill on display, sweeping 1-4 in the 100 back. They kept rolling, winning the final three individual events of the day, putting the meet away before the final relay. Georgia can’t stand up to the Gators’ strength in the NCAA-format, but the result is a boost for a team trying to reassert its identity.

Inter-Division Upset – D3 Denison Women Beat D1 Xavier: In their home opener the Denison women defeated Xavier, 137-125. The Denison women are perennial contenders at the NCAA level–last season they finished third behind only Kenyon and Emory. They’re facing Kenyon in a showdown this week and they built up some momentum by grabbing a win last weekend. They got off to a rough start by disqualified their ‘A’ 200 medley relay but bounced back quickly with wins in four of the next five events. One of the most impressive parts of their victory was that they came out on the right side of multiple close touches. They won six events by .12 seconds or less, highlighted by Quinn Brown‘s win in the 500 free by a hundredth over Kali Fischer, 5:03.66 to 5:03.67.

Tiger vs. Tiger – Kalle Makinen Edges Out Brooks Curry: It was Tigers versus Tigers as LSU and Auburn faced off in an in-conference dual meet last week. It was an interesting matchup, as both teams are showing signs that they’ll be moving up in the conference come March. Auburn came away with wins on both sides, and one of the most interesting results was Auburn freshman Kalle Makinen beating Brooks Curry in the 50 free, 19.82 to 19.89.

Let’s be careful not to get too far ahead of ourselves here: it’s an October dual meet, Curry’s already hit 19.45, and was about to hop on a plane to swim at the Toronto leg of the FINA World Cup. But while it’s certainly an overstep to pencil in Makinen as an upset national champion, his 19.82 backs up the suited 19.71 he swam at the USC Invite. The Finnish freshman is still in his first semester and therefore, still adjusting to racing yards. He’s already competitive in the sprints and as the season progresses, watch for him to continue lowering that lifetime best. Auburn’s built up quite a lot of momentum, and it looks like Makinen is a key part of their continued rise. 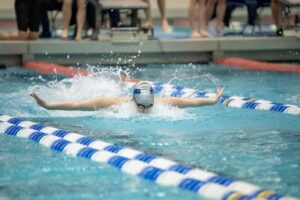 History on the Hilltop – Georgetown Women Defeat Villanova: Heading back inside the Beltway, the Georgetown women beat Villanova for the first time in program history, giving the Hoyas their first ever sweep of the Wildcats. They earned this first win handily, beating Villanova 161-139. Highlighting their win was their 1-3 sweep of the 1000 free, led by Corey Moon (10:23.41). Ashley Vensel (10:33.01) and Ryan Evangelista (10:42.91) finished second and third. Their breaststroke duo of Erin Hood and Alex Breuer also played a big role in the win. They went 1-2 in both the 100 and 200 breast, separated by only .55 seconds in the 100. Last season, the Georgetown men captured the program’s first Big East title in program history, and they dominated here, winning 217-83.

In their dual with Pacific, most of the Cal men swam secondary and tertiary events. And some, like Bjorn Seeliger, swam their absolute off-events. Seeliger, a sprinter, took on the 500 free and posted some absolutely chaotic splits en-route to his 4:39.14.
Speaking of sprint freestylers trying new things, Northwestern’s sprint freestlyer Jasmine Nocentini threw down a sizzling 26.82 50 breast split on the 200 medley relay. That’s a split that would compete with the likes Kaitlyn Dobler and Anna Elendt, some of the league’s best breaststrokers. While Nocentini likely will stay focused on the sprints, the fact that she can drop this speed unsuited in October gives her (and Northwestern) some intriguing options moving forward.
FSU senior Peter Varjasi made some noise over the weekend at a dual with Georgia Tech. He won the 100 and 200 free easily, posting 42.83 and 1:34.54. His 100 free time puts him sixth in the NCAA this year, while his 200 free ties him for third with Grant House. FSU only qualified relays for NCAAs last year, none of which scored. It would be a huge boost for the program if Varjasi can qualify individually.

What If The Super Suits Had Not Been Banned In 2010?