A swimming pool is just a swimming pool. Fifty meters, eight, maybe 10 lanes, starting blocks. That’s it: all you need to swim, race, and compete. Right? Not exactly. Location, landscape, capacity, vibes: these are the things that can set apart the swimming pools that are more than just swimming pools. They’re venues.

Read on to learn about eight magnificent competition pools (temporary and permanent) built in some very special locations.

8. In the middle of nowhere

Well, not in the middle of nowhere, but in the middle of a huge park. In July 2005 Montreal hosted a FINA World Championships, which was the first time in history a North American city hosted the event. To stage the competitions, the city and the Organizing Committee renovated the historical Pavillon des Baigneurs on the river island Île Sainte-Hélène, adding a new swimming complex.

Seven pools — three permanent and four temporary — were built on the site in Parc Jean-Drapeau, where 2,500 athletes and 300,000 spectators attended the Championships while surrounded by trees. An oasis of swimming on an oasis in the river.

Swimming and track and field have a lot in common. They are both sports based on time, where the one and only judge is the stopwatch. As fast as you can. As simple as that. 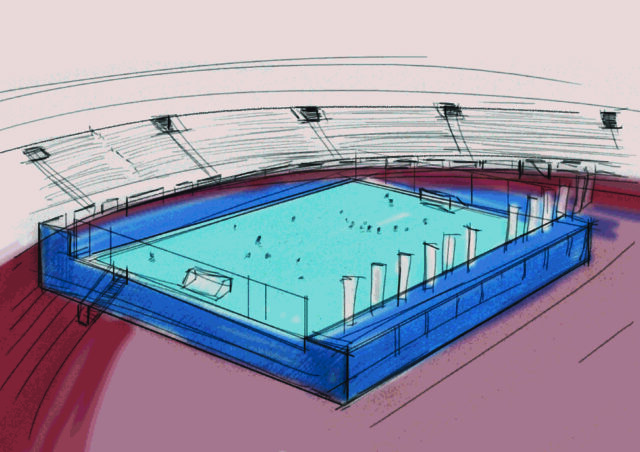 In 1995, for the European Championships, one of the first temporary pools ever was placed on the athletics track of the Ernst Happel Stadium, in Vienna, Austria. The time available for the installation was very short, being that the stadium had already been booked for a rock concert on July 9, one month before the European started. Besides that, it was not possible to build masonry works, since the surface of the athletics track had to be safely preserved. That made this pool a challenge for a number of reasons, but it was ultimately executed under pressure.

The 11th edition of the FINA Short Course World Swimming Championships took place in Istanbul, December 12-16, 2012. The event took place at the Sinan Erdem Dome, Turkey’s largest multipurpose indoor venue and the third largest in Europe (367 ft. × 505 ft.) with a seating capacity of 22,500 for concerts. The main pool, where the races took place, was installed directly above the main basketball court. 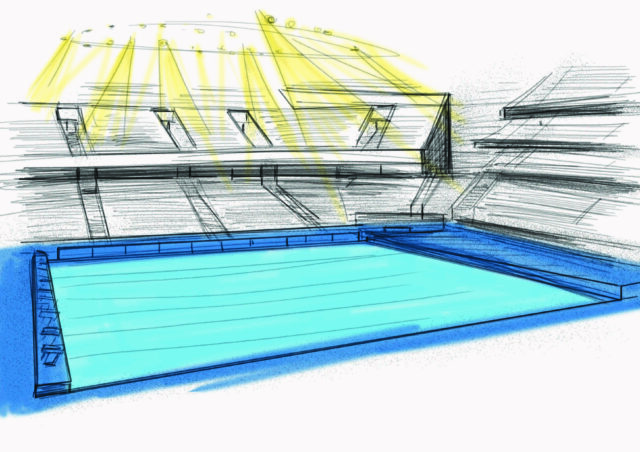 Thirteen years ago, in the same place where the best tennis players in the world fight for the Rome Masters 1000 tournament every year, there was a pool. The competition pools for artistic swimming and water polo at the 2009 World Championships in Italy took place inside the tennis stadium, only two months after the inauguration of the facility. The pool was very close to the Foro Italico and the aerial view was amazing, with a lot of water in the middle of dense Rome. 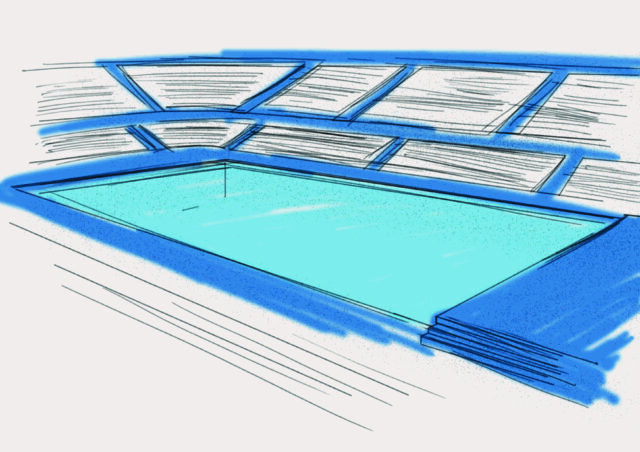 4. Because ice is cold water

December 2016. Windsor, Ontario, Canada, welcomed the last swimming event of 2016, the World Swimming Championships (25 m). The hockey arena of the WFCU Centre was the selected location for the swimming competitions. The day before there was a long stretch of ice, the day after you could find swimmers ready to dive into a very cold (believe me) swimming pool. The organization swore it hadn’t thawed the water on the hockey rink, but I still have doubts. 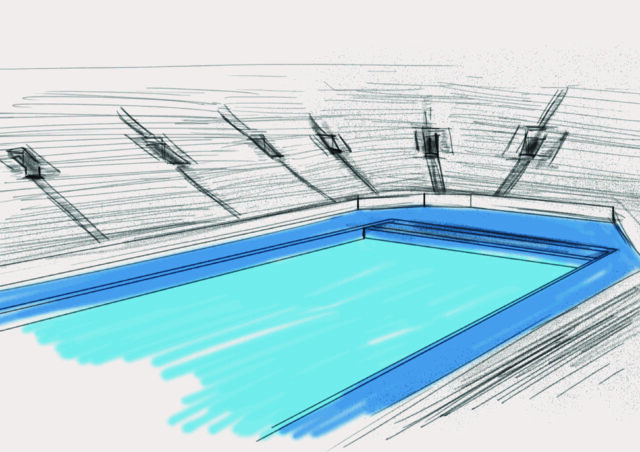 One of the craziest pools in the world was built during the Grand Finale of the International Swimming League 2019 in Las Vegas. Inside the Mandalay Bay Hotel’s arena, which usually hosts grand events and boxing matches, was a competition pool with an acrylic wall and a magnificent vanishing edge. This allowed spectators and television cameras to see competitors race from the side of the elevated glass walls — a sight rarely seen in the sport. 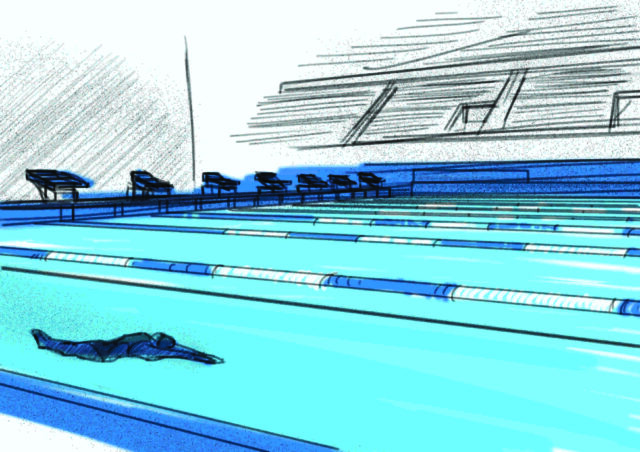 The Berlin Velodrom used for the 2014 European Championships is one of the most impressive multipurpose arenas in Germany. With a diameter of 142 meters, this suspended ceiling structure is the largest of its kind in the world. The arena was originally built for the cycling competitions as part of the Berlin Olympic Games bid in 2000. Great, but you know what happens to backstrokers who swim in a place with a circular ceiling? Yeah, nothing good. 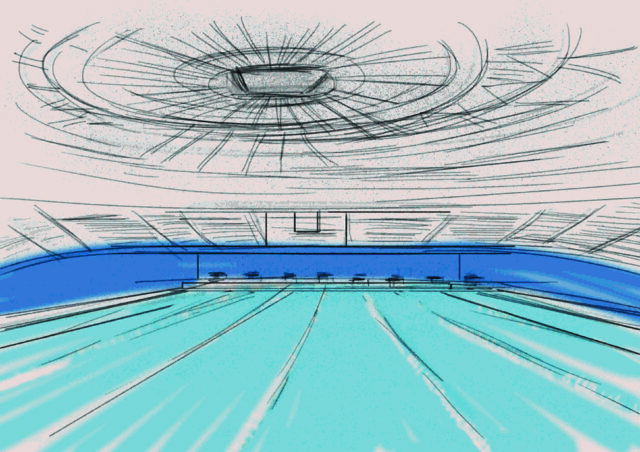 1. We are so small compared to the sea

No official competition has ever been held in this pool. But it takes a genius, or perhaps a child, to decide to fence off the sea. In Zadar, Croatia, a perfect 50-meter pool was carved out of the sea with cement, using seawater to continually fill it. 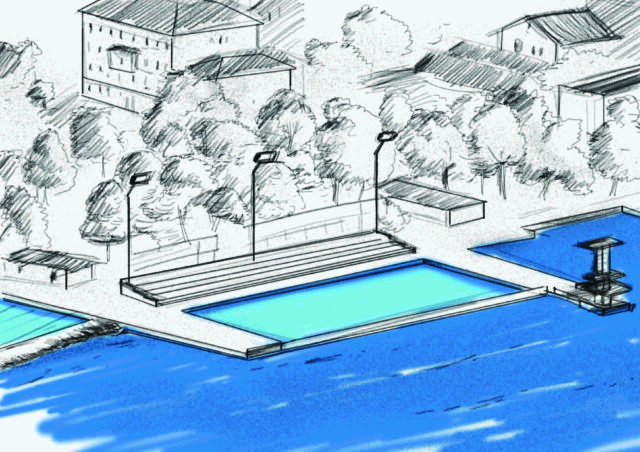 Debased Sarasota sea shores shut for swimming, however not due to red tide